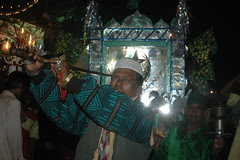 Eye ball piercing is the main forte of the Rafaees, than tongue cutting and other aspects of body mutilation without releasing blood.. 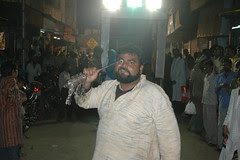 This man is Sharukh Rafaees father , an exponent of sword and eyeball piercing , he is very famous at Mahim and though he is not from the mendicant group of the Chancawalli Rafaees.He is paid by the organisers who invite him to take part in the sandals. 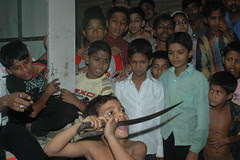 He is a young Rafaee and a very proud one too.
His father named him Sharukh after Indias most famous cine star.
And Sharukh Rafaee is no less a cine star.
He uses swords like a tennis racquet.
He is displaying his expertise and his skill along with the elder rafaees of Chancawalli.
A pillar looms above his head , his father Chalak Ali.. who pierces his eyeballs and than lifts a cycle with the same instrument stuck to his eye.
So like father like son.
Hs father made him sleep on the floor and placed his entire force on Sharukhs neck with a scimitar..this is a long series , for those to the sites where I cross blog -I will be posting all this at Flickrs..
I gave Sharukh Rs 50- and he was indeed touched.
This was the procession of the Sandal of Fakhruddin Shah Baba I must have shot over 450 pictures.. in bad light just my Nikon SB800 Flash..

Muslim Man in a Hurry 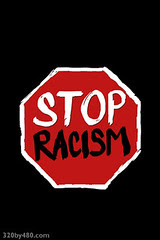 My account Firoze Shakir, Hubcap Shithead and Love Poetry Hate Racism was disabled at Poem Hunter where I published all my poems on December 12 th 2007.
I had asked Poem Hunter Support to delete all my poems , they deleted one main acccount Firoze Shakir 1800 poems, , but my other two accounts Love Poetry Hate Racism were not deleted and were online for almost a month after being debarred from Poem Hunter .
I requested Trade Martin a celebrity Poet of Poem Hunter and International musician to talk to Emily T of Poem Hunter Support on my behalf and this morning she sent a message to Trade Martin that finally my poems have been deleted.
On Jan 6, 2008 6:41 PM, Trade Martin
wrote
Dear Emily....., I hope you are well, and I always do appreciate your kind responses to my e-mails. I still stay in close contact with my friend Firoze, and he's e-mailed me today to ask you to please delete all of his poems that are listed under his other names...., "LOVE POETRY, HATE RACISM" and "HUBCAP SHITHEAD". He mentioned that you've already deleted his other writings, but would like these poems of his to also be removed when you get a chance. Thanks so much....!!! Best regards, Trade.
Date: Wed, 9 Jan 2008 22:48:52 +0200
From: poemhunter@
To: trade_martin
Subject: Re: Request.
Dear MArtin;
I have deleted all poems under "LOVE POETRY, HATE RACISM" and "HUBCAP SHITHEAD" names.
Best Regards
Emily

This was very important as I had deleted most of the poems I wrote viciously on people who had attacked me and all my attackers nothing but racists disguised as poets.
And I can now say without any regrets that the website was aware of all these attacks and instead of punishing those who made my life ,miserable sided and supported the powerful coterie of racists.
Yes Racism exists in Poetry after all.
Is Kicking and Alive .
I am thankful to a handful of poets who helped me all the way..
Trade Martin, Ted Sheridan, David Hazell, Ray Lucero Sherrie Gonsalez Kolb, Yoonus Peerbocus.and the brave heart young Vikram Aarella from UK..
This poetry site
www.firozeshakir.com
would have not been possible without them

A Handful of Hazrat Abbas 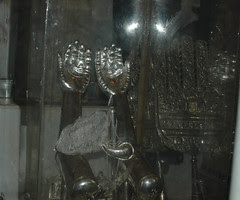 What is the Lesson of the Tragedy of Karbala ? There is of course the physical suffering in martyrdom, and all sorrow and suffering claim our sympathy, —- the dearest, purest, most outflowing sympathy that we can give. But there is a greater suffering than physical suffering. That is when a valiant soul seems to stand against the world; when the noblest motives are reviled and mocked; when truth seems to suffer an eclipse.

It may even seem that the martyr has but to say a word of compliance, do a little deed of non-resistance; and much sorrow and suffering would be saved; and the insidious whisper comes: “Truth after all can never die.” That is perfectly true. Abstract truth can never die. It is independent of man’s cognition. But the whole battle is for man’s keeping hold of truth and righteousness. And that can only be done by the highest examples of man’s conduct - spiritual striving and suffering enduring firmness of faith and purpose, patience and courage where ordinary mortals would give in or be cowed down, the sacrifice of ordinary motives to supreme truth in scorn of consequence. The martyr bears witness, and the witness redeems what would otherwise be called failure. It so happened with Husain. For all were touched by the story of his martyrdom, and it gave the deathblow to the politics of Damascus and all it stood for. And Muharram has still the power to unite the different schools of thought in Islam, and make a powerful appeal to non-Muslims also

Imam Husain And His Martyrdom
By Abdullah Yusuf Ali
Renowned English translator and commentator of the Holy Qur’an
(Progressive Islam Pamphlet No. 7, September, 1931)

To find out more about Imam Husayn [a], his position in Islam, his noble family, their sacrifice in the deserts of Karbala, and its universal relevance, see the following resources:

The Excellences of Imam Husayn In Sunni Hadith Tradition
The Revolution of Imam Husayn
Karbala, an enduring paradigm of Islamic revivalism
Imam Husayn’s Concepts of Religion and Leadership
Victory of Truth: Life of Zaynab bt. ‘Ali
The Illustrious Period of the Imamate of Imam Zayn al-’Abidin
Karbala and the Imam Husayn in Persian and Indo-Muslim literature
Also see the heading “Ahlul Bayt - Imam Husayn” and “Karbala” in the Subject Index for many more text, audio, and video resources