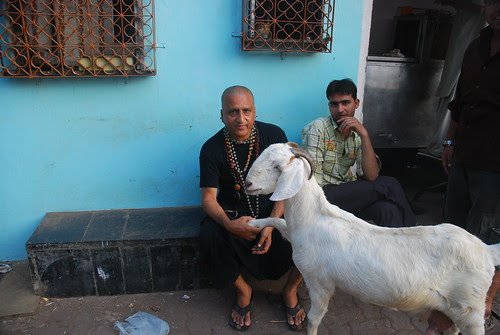 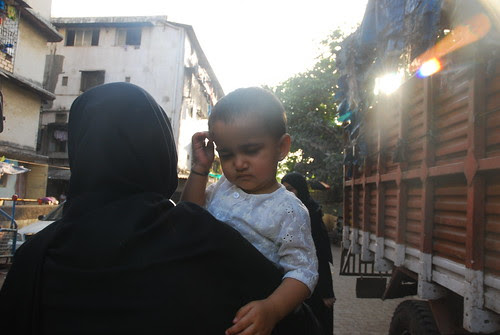 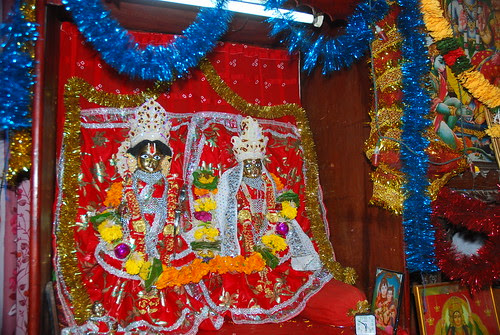 Rama Navami (Devanāgarī: राम नवमी) also known as Sri Rama Navami (IAST SriRāma-navamī) is a Hindu festival, celebrating the birth of Lord Rama to King Dasharatha and Queen Kausalya of Ayodhya. Rama is the 7th incarnation of the Dashavatara of Vishnu[1][2][3]. The festival falls in the Shukla Paksha on the Navami, ninth day of the Chaitra month of Hindu calendar. Thus it is also known as Chaitra Masa Suklapaksha Navami, and marks the end of nine-day Chaitra-Navratri celebrations.

At some places the festival lasts the whole nine days of the Navratras, thus the period is called 'Sri Rama Navratra'. [4][5] It is marked by continuous recitals, Akhand Paath, mostly of the Ramacharitamanas, organized several days in advance to culminate on this day, with elaborate bhajan, kirtan and distribution of prasad after the puja and aarti. Images of infant form of Sri Rama are placed on cradles and rocked by devotees. Since Rama is the 7th incarnation of Vishnu having born at noon, temples and family shrines are elaborately decorated and traditional prayers are chanted together by the family in the morning. Also, at temples special havans are organized, along with Vedic chanting of Vedic mantras and offerings of fruits and flowers. Many followers mark this day by Vrata (fasting) through the day followed by feasting in the evening, or at the culmination of celebrations.[1][6][7] In South India, the day is also celebrated as the wedding anniversary of Sri Rama and his consort Sita. Sitarama Kalyanam, the ceremonial wedding ceremony of the celestial couple is held at temples throughout the region, with great fanfare and accompanied by group chanting of name of Rama, (Rama nama smaranam). [8][9]

The important celebrations on this day take place at Ayodhya (Uttar Pradesh), Bhadrachalam (Andhra Pradesh) and Rameswaram (Tamil Nadu), thronged by thousands of devotees. Rathayatras, the chariot processions, also known as Shobha yatras of Rama, Sita, Lakshmana and Hanuman, are taken out at several places,[1][10][11] including Ayodhya where thousands of people take a dip in the sacred river Sarayu.[12]

In the epic Ramayana, Dasharatha, the Emperor from Ayodhya, had three wives named Kausalya, Sumitra and Kaikeyi in the Treta Yuga, which follows the Satya Yuga and is succeeded by Dwapara Yuga. Their greatest worry was that they had no children, and so they had no heir to the throne in the Ikshvaku Kula or royal lineage of great, pious, wonderful Emperors. Rishi Vasistha suggests him to perform Puthra Kamesti Yagna, through which he can have a desired child. He also tells him to bring Maha Rishi Rishyasringa to perform this yagna for him. Emperor Dasharath consents and heads to Maharshi Rushya Shrunga's ashram, to invite him. Maharshi agrees and accompanies Emperor Dasharatha to Ayodhya (Capital of Avadha) and performs the yagna. As the result of this yagna, Yagneshwara appears and provides Dasharatha a bowl of divine pudding or Kheer/Payasam and requests him to give it to his wives. Dasharata gives one half of the payasam to his elder wife Kausalya, and another half to his younger wife Kaikeyi. They both give half of their portions to Sumitra. After few days all three Queens conceive. On the ninth day (Navami) of Chaithra Masa (last month in Vedic calendar), at noon Kausalya gives birth to Rama, Kaikeyi gives birth to Bharata, and Sumitra to twin boys, Lakshmana and Shatrughna.

Rama is the seventh incarnation of Vishnu, who takes birth by His own will, on Bhuloka (Earth) when Adharma rules over Dharma. He protects all his devotees by vanquishing the roots of Adharma. Rama decided to incarnate on born on earth to destroy an Asura or person with demonaic and evil designs, called Ravana.
[edit] Natal chart of Rama

Valmiki in his Sanskrit text Ramayan describes the natal or birth chart of young Rama [13], and this day is celebrated as Ramanavami festival throughout India and amongst Indian diaspora [14].:
“ “On completion of the ritual six seasons have passed by and then in the twelfth month, on the ninth day of Chaitra month [March-April], when the presiding deity of ruling star of the day is Aditi, where the ruling star of day is Punarvasu (Nakshatra), the asterism is in the ascendant, and when five of the nine planets viz., Sun, Mars, Jupiter, Saturn, and Venus are at their highest position, when Jupiter with Moon is ascendant in Cancer, and when day is advancing, then Queen Kausalya gave birth to a son with all the divine attributes like lotus-red eyes, lengthy arms, roseate lips, voice like drumbeat, and who took birth to delight the Ikshwaku dynasty, who is adored by all the worlds, and who is the greatly blessed epitome of Vishnu, namely Rama.”
- Book I : Bala Kanda, Ramayana by Valmiki, Chapter (Sarga) 18, Verse 8, 9, 10 and 11 [15] ”
[edit] Celebration

Followers of Hinduism normally perform Kalyanotsavam (marriage celebration) with small deities murtis of Rama and Sita in their homes, and at the end of the day the deity is taken to a procession on the streets. This day also marks the end of the nine-day utsava called Chaitra Navaratri (Maharashtra) or Vasanthothsava (Karnataka, Andhra Pradesh & Tamil Nadu) (festival of Spring), which starts with Gudi Padwa (Maharashtra). According to recent astrological studies, some consider his date of birth to be January 10, 5114 B.C. [16][17]
A Home shrine with images of Rama, Sita, Lakshmana and Hanuman, on Sri Rama Navami

Some highlights of this day include

* Kalyanam, a ceremonial wedding performed by temple priests
* Panakam, a sweet drink prepared on this day with jaggery and pepper.
* Procession of murtis in the evening, accompanied by playing with water and colours.

For the occasion, Followers of Hinduism fast or restrict themselves to a specific diet in accordance to VedaDharma. Vedic temples are decorated and readings of the Ramayana take place. Along with SriRama, people also worship Sita, Rama's wife; Lakshmana, Rama's brother; and Hanuman, an ardent devotee of Rama and the leader of his army in the battle against the asura Ravana.

SriRama Navami is dedicated to remembering Rama, as the most Supreme with resolute Bhakti (devotion). It occurs on the ninth day, or navami beginning count from the "no moon day" or Amavasya, during the waxing moon duration called "Shukla Paksha". The festival commemorates the birth of SriRama who is remembered for his prosperous and righteous reign.

The "Kalyanam" performed in the Bhadrachalam Temple, in Andhra Pradesh is very famous.[18]

A number of ISKCON temples introduced a more prominent celebration of the occasion of the holiday with the view of addressing needs of growing native Hindu congregation. It is however always was a notable calendar event on the traditional Gaurabda calendar with a specific additional requirement of fasting by devotees.[19]

Sri Rama Navami is shared with Swaminarayan Jayanti, the birth of Swaminarayan, who was born in the village of Chhapaiya in the state of Uttar Pradesh.

Rama Rajya, the reign of Sri Rama is a rare duration of peace and prosperity bestowed by Him alone. Mahatma Gandhi, the father of modern India used this divine term to describe how he felt India should be run post-Independence from the British monarchy.

Sri Rama Navami generally occurs in the months of March and April. Celebrations and festivities begin with prayer to the SuryaDeva early in the morning. At midday, when Rama incarnated on that day in Treta Yuga, that duration is special and hence devotional seva to Him is performed with Bhakti and peity.

In Northern India, an event that draws popular participation is the Rama Navami procession, also called Ratha Yatra. The main attraction in this procession is a gaily decorated chariot in which four persons enact the divine pastimes of Rama, His brother Lakshmana, His queen Sita and His pure devotee, Hanuman. The chariot is accompanied by several other persons dressed up in ancient costumes as Rama's soldiers. The procession is a gusty affair with the participants praising echoing the blissful days of Rama's rule as the Supreme Emperor on Bhuloka (Earth).

Fr Gerard and me 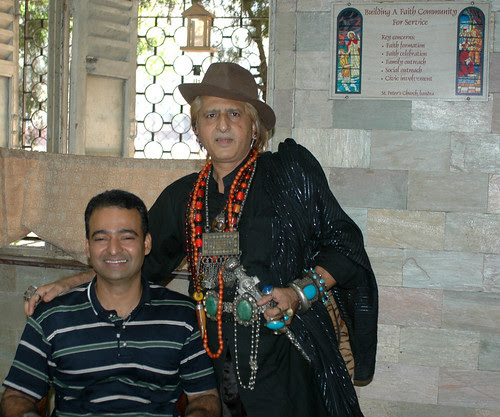 Fr Gerard and me, originally uploaded by firoze shakir photographerno1.

Fr Gerard is a very dear friend and through his wisdom his love for humanity I have learnt a lot.. and St Peter Church is my second home when I am down and depressed I come here and calm my turbulent spirits .. 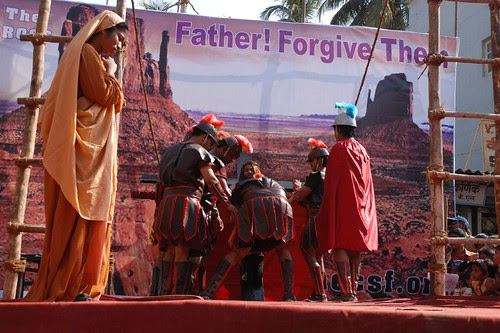 The Son of God - On Good Friday 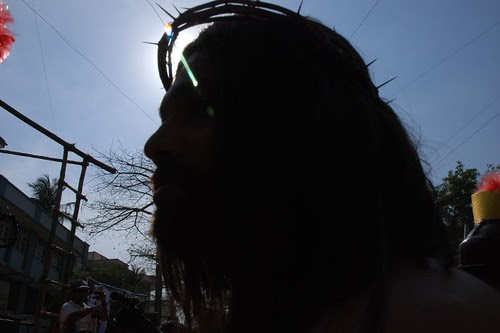 The Son of God - On Good Friday, originally uploaded by firoze shakir photographerno1.

This was a picture that needed no words, it translates itself in a language of pain...in a mans world...

its a wordless poem.. read it with your eyes closed. I am updating it as a poem to link it to facebook...