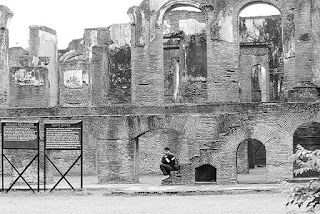 Every time I came to Lucknow to shoot Moharam I would make it a point a photographic pilgrimage to meet the greatest historian literary authority of Lucknow late Mr PC Little ..I was introduced to him by his two sons Bhuphesh and Avinash Little .

Mr PC Little was a hobbyist camera repairer and like me a lover of Keats poetry ,, and as we framed our thoughts in poetry he became my teacher guide and Mentor ,,

And it was at the St Marys Cemetery I found solace peace and poetic serenity ,,

This slideshow that I will be presenting ,,today at You Tube is dedicated to Mr PC Littles Memory


The Residency, also called as the British Residency and Residency Complex, is a group of several building in a common precinct in the city of Lucknow, India. The Residency now exists in ruins and is located in the heart of the city, in vicinity of other monuments like Shaheed Smarak, Tehri Kothi and High Court Building. It was constructed during the rule of Nawab Saadat Ali Khan II,who was the fifth Nawab of the province of Awadh (British Spelling Oudh). The construction took place between 1780 to 1800 AD and served as the residence for the British Resident General who was a representative in the court of the Nawab. In 1857 the place witnessed a prolonged battle which is also known as Siege of Lucknow; this began on 1 July and continued until 17 November.

The Residency has been maintained as it was at the time of the final relief, and the shattered walls are still scarred by cannon shot. Even since Indian Independence, little has changed. The ruined building is surrounded by lawns and flowerbeds and is a tourist attraction nowadays. The cemetery at the nearby ruined church has the graves of 2000 men, women and children, including that of Sir Henry Lawrence who died during the siege. There is a weathered epitaph near the grave of Sir Henry that reads "Here lies the son of Empire who tried to do his duty" while another nearby grave reads "Do not weep my children, for I am not dead, but am sleeping here." A light and sound show to show display the history of the Residency is also played each evening. 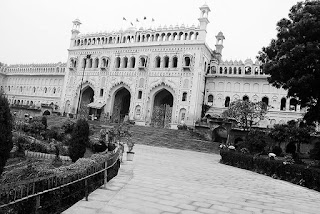 My tryst with Bada Imambada was a very strange one ,,and people caretakers at Bada Imambada mostly Shias who knew me because I documented Moharam in Lucknow thought I was totally crazy ,, I had got obsessed with the royal bats at the Bauli and spent hours shooting them.. the stink was unbearable of their droppings but they seemed to like me ,, and ..I shot the Bara Imambara and the Ag Ka Matam here on 6 th of Moharam.


Bara Imambara (Urdu: بڑا امامباڑا‎, Hindi: बड़ा इमामबाड़ा) is an imambara complex in Lucknow, India, built by Asaf-ud-Daula, Nawab of Awadh, in 1784. It is also called the Asafi Imambara.

Bara means big, and an imambara is a shrine built by Shia Muslims for the purpose of Azadari. The Bara Imambara is among the grandest buildings of Lucknow.

The Asfi mosque, located near the Imambara
The complex also includes the large Asfi mosque, the bhul-bhulaiya (the labyrinth), and bowli, a step well with running water. Two imposing gateways lead to the main hall.

Relief measure[edit]
Construction of Bara Imambara was started in 1785, a year of a devastating famine, and one of Asaf-ud-Daula's objectives in embarking on this grandiose project was to provide employment for people in the region for almost a decade while the famine lasted. It is said that ordinary people used to work in the day building up the edifice, while noblemen and other elite worked at night to break down anything that was raised that day. It was a project that preceded a Keynesian like intervention for employment generation. Construction of the Imambara was completed in 1791. Estimated cost of building the Imambara ranges between half a million rupees to a million rupees. Even after completion, the Nawab used to spend between four and five hundred thousand rupees on its decoration annually.[1]

The simple grave of Asaf ud-Daula under a canopy inside the Bara Imambara; a watercolor by Seeta Ram, c. 1814–15

Rumi Darwaza, gateway to Husainabad Imambara in Lucknow in India, around 1860
The architecture of the complex reflects the maturation of ornamented Mughal design, namely the Badshahi Mosque - it is one of the last major projects not incorporating any European elements or the use of iron. The main imambara consists of a large vaulted central chamber containing the tomb of Asaf-ud-Daula. At 50 by 16 meters and over 15 meters tall, it has no beams supporting the ceiling and is one of the largest such arched constructions in the world. There are eight surrounding chambers built to different roof heights, permitting the space above these to be reconstructed as a three-dimensional labyrinth with passages interconnecting with each other through 489 identical doorways. This part of the building, and often the whole complex, may be referred to as the Bhulbhulaya. Known as a popular attraction, it is possibly the only existing maze in India and came about unintentionally to support the weight of the building which is constructed on marshy land. Asaf-ud-Daula also erected the 18 meter (59 foot) high Rumi Darwaza, just outside. This portal, embellished with lavish decorations, was the Imambara's west facing entrance.[2]

The design of the Imambara was obtained through a competitive process. The winner was a Delhi architect Kifayatullah,[1] who also lies buried in the main hall of the Imambara. It is another unique aspect of the building that the sponsor and the architect lie buried beside each other.The roof of Imambara is made up from the rice husk which make this Imambara a unique building

Legend[edit]
There is also a blocked (tunnel) passageway which, according to legends, leads through a mile-long underground passage to a location near the Gomti river. Other passages are rumoured to lead to Faizabad (the former seat of power of the Nawabs), Allahabad and even to Delhi. They exist but have been sealed after a period of long disuse as well as fears over the disappearance of people who had reportedly gone missing, while exploring.
By Firoze Shakir Photographer No1 - July 25, 2016