You Are The First Person Asking Me Why I Beg 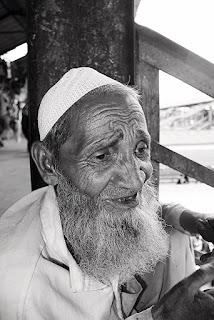 This is a video I shot yesterday on the Kurla overbridge I have not uploaded it .. as I was tired carrying a huge bag I had come from Ghatkopar by Ricksha and was going to Kurla East to meet my friends Asif Patel and Mohomed Sajjad , flowerhorn kings of Kurla East.

I spotted him sitting in a corner , I took this shot , than something hit me very hard , I gave him money sat next to him, I was dressed in my malang attire , turban rings etc..

I took out my mobile phone , and asked him to tell me his story , why he was begging , he had tears in his eyes , he is from Madhya Pradesh, he had one daughter a son in law,..his own house life was nice till his son in law died tragically -prolonged sickness , his daughter could not bear her husbands death , she would cry , and soon realized she too was sick with cancer ..she died , he  had mortgaged his house for her medicine etc..

His wife takes care of their grandkids and he comes to Mumbai to beg.. his only wish is that he pays of the mortgage , he will go back to his hometown and never return to Mumbai, the best season for begging is Ramzan so he is waiting for the Holy Month Of Hope and Piety , when even Muslim misers give a coin or two.

Its only during Bakra Eid they give a lot only to buy goats for atrocious amounts .. and they do charity giving the skins of the goats to the Masjid ,, If I say more it would be shooting words in the Air ,,

Last year my wife and I decided we will not do the Kurbani give the entire money to charity ,, perhaps a heretic thought but we are happy with it and for the goat too.

So this is a roadside story I shot accidentally , perhaps God wanted me to share his pain , his story with all of you..

The best part is starting a story and knowing when to end it .. this story ends with this picture and begins with my video.

Email ThisBlogThis!Share to TwitterShare to FacebookShare to Pinterest
Labels: You Are The First Person Asking Me Why I Beg 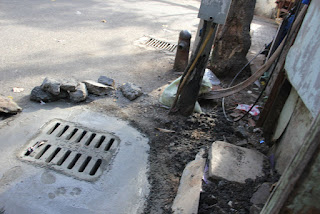 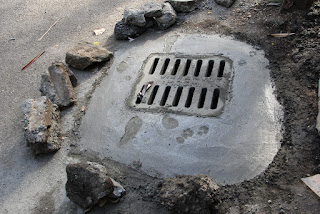 It was repaired in the evening ,and for 5 days and nights , the people who jay walk , with their phones stuck to their ears fell inside .. my building watchman told me 3 people fell in the night , before it was repaired and a BMW tyre got stuck in the open sewer ,and this was outside our building where our erstwhile MLA Advocate Ashish Shelar stays ,,need I say further .. but I must add when the common man suffers there is no one to come to his aid at all.

And Bandra Bazar road is a total mess chaos because of the Bandra Municipality and our Congress corporator who has no time to make life better for us and we have to to bear him for another two years ..I am a disillusioned ex Congress traditional voter I will vote for the Devil but never for the Congress and I am not a run of the mill Muslim , I am street educated and as a photographer the camera honestly showed me the crass all around ,, I am not an activist, I am not a part of any ALM group , I am not part of any political party I have no evil agenda ..at the age of 62 as a senior citizen I feel the pain of my dying surroundings ,,

A few days back , I was returning home through the backlanes of Bandra from the Bandra Reclamation transit camps near Gen Kumar Vaidya Marg. and I was shocked to see the guy who sells bangles at De Monte Street and lives in a building close by filling water from a roadside tap..he house ladies carrying the water to drink on their heads and in bottles ,, I asked him what happened , he said their building had no water supply for a week, I did not shoot the picture out of respect as he suffers from Albinism.

Honestly how much can the ordinary man take , 15 years it was the Congress NCP that was in power but they did nothing ,, only colorful brochures of Dengue Free Bandra , lots of talk but no returns .Even the residents in our area have lost their Voice , they seem to live like Zombies , lifeless clueless .. We have no Ms Aftab Siddiqui, or other brave activist like those at Khar and Pali Hill.. vociferous who get the work done ,,Sadly our local newspapers are still eulogizing this lost party trying to bring it back fro political wilderness ,,

Our MP Ms Poonam Mahajan sadly does not have much love for this part of the poor mans Bandra ,, I dont know why I was a great hardcore fan of her father late Mr Pramod Mahajan a great visionary and helper of the poor. I voted for BJP in both the elections so I hope to see some progress some development and a wee bit of Acche Din. I dont know about Sab Ka Sath Sab Ka Vikas ,, I am still confused like the beggars I shoot , the homeless , the hopeless .

And this is my first blog of the day I am posting directly at Facebook.. I could never use my Facebook copy pasting GIFS and other peoples pictures I believe in Original Content , simple pictures .. that tell the story of the dying spirit of Man.

My pictures are not fine Art , nor panoramic landscapes , I have no landscape in Bandra Bazar to shoot , running rivers overflowing streams I will shoot when my gutters start overflowing with gurgling filth..I certainly wont rush to Worli Seaface or Marine Drive to shoot lusty youth and women cavorting their non libidinous bodies in the rains ,,

But yes I will shoot the blind beggar wet to the bones shivering and give him money and an umbrella , I will be buying a whole lot from Chor Bazar and distributing it to them , and old sarees for the Hijras who beg at Pali Road junction all of them my friends ,, wellwishers , ,,

So this is life I had a very hectic day last evening , the Jeans washing for a client of mine was done and the guys who did it did not ask a cent from me I had given Rs 500 as advance they returned that back to me only because they love my friend Anil Hirani who had sent me to them..Anil Hirani was owner of Nostradamus Bandra Hill Road.

This is the other side of Love and Hope in Mumbai. I now will move my ass to walk my 8 KM At MET grounds Bandra ..

The video of the beggar I shot at Kurla overbridge ,, was the saddest story I shot the old Muslim beggar told me if God helped him he would give up begging forever , his house is mortgaged in MP , and that he will never ever come back to Mumbai..

I wondered where would I go if I left Mumbai.. ..not the wilds or Mountains of India ,, 62 years spent in Mumbai I have yet to see Snow ,,, lol.

Happy Morning ,,,to all you early birds ,,if you want to walk with me give me a Buzz ,, entertained by Col Sahbiz Singh Judge his encounter stories, Prakash Gadiya who distributes Rs 10 to the MET watchmen , Mr Milind Pitle Santosh Singh and Subhash Singh , his story I will tell you some other time ,,

But I must mention about Mr Pawar who coaches kids adults at MET Badminton Courts , he is well known in Bollywood circles , and his godfather he tells me is Mr Mohan Kumar Sab,, father of my friends Rohit Kumar And Gautam Kumar .

He respects me a lot , and inquires about my health ..there is a child prodigy he teaches a Chedda boy who plays with the adults ,, I will interview him one day.. both father and son play at the courts and a Marathi family in advertising , they play for long hours here , they come from Ville Parle ,,

There are lots of stories but I must move now ..

Email ThisBlogThis!Share to TwitterShare to FacebookShare to Pinterest
Labels: After Several Blogs And A Video The Open Gutter Was Finally Repaired 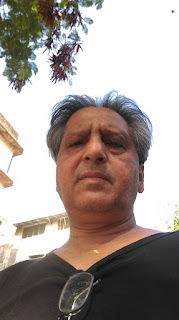 I sold my old phones Motorola G old model 8GB and my Sons Motorola G 16 GB at Cell City at Bandra Hill Road , this is a new store owned by Bhavesh Bhai.. He gave me Rs 10000 for both my phones in exchange and I had to pay just Rs 14000 for the HTC Desire 826,, The difference was paid by my son... who first gave me a Xiaomi Note , that was duly returned to Flipkart , both times they gave us a defective phone , my son took  the Lunia 640 here the video sound was atrocious , this was bought from Flipkart too..
So I had finally told my son I will pay extra but not buy a single stuff from Flipkart , bad after sales service bad attitude and their bosses the Bansals dont give a shit to ordinary , senior citizens like us ..

So I am now shooting videos pictures with HTC Desire 826 front back camera 15 megapixel.

I shot a video of an old beggar in very bad shape at Kurla Station overbridge ,,,his story was tragic he had tears in his eyes while narrating his bad luck I gave him money , but he needs more than that .. his wife takes care of his grandchildren , first his son in law died than his only one daughter died of cancer he is from Madhya Pradesh.
By Firoze Shakir Photographer No1 - June 09, 2015 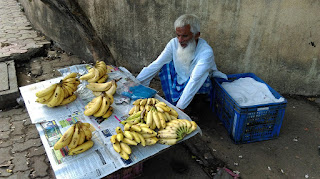 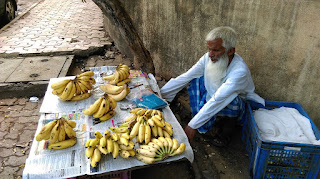 He is my morning walk friend I meet him in the mornings , when  I come for my walk at MET Grounds Bandra Reclamation.

I told you part of his story in my earlier blogs , as he lives in the slums , he gave all his hard earned savings to a friend for safekeeping as he was hoping to leave for his hometown in June ,.. but he was in for a surprise the guy who had his money left Mumbai with his money without informing him.. he later found out that his friends son met with an accident so he had left for his native place Saharanpur ,, he will return back on 15 th June ..

The banana seller sells his stuff on a cart , and he was caught by the Mumbai Municipality fined and his cart confiscated ,the Municipality says they dont want carts on the streets of Bandra..

So badly hassled beaten by bad luck he is now selling the bananas on the road ,,, he has to earn survive , he has a daughter who will soon be getting married and he is an old defeated man .. but he has not given up,,,

This is his story... part of my street story...

I had told he should have kept his money in a bank, but he is uneducated , and very simple to the core , about his bad luck he tells me that it is Allah ki Marzi.. Gods Will ...