Our Municipal School Is A Prison Cell 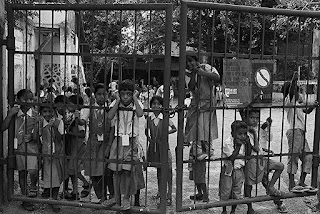 as the teachers
shout and yell
the kids are
desperately
waiting for
the school bell
to get away from
here where they
dwell parroting
lessons unlearning
to spell a morbid
concentration
camp worse than
hell a school bag
that wants to rebel
with a brick load
of unused knowledge
drawn from a sinking
well .. than one day
as hawkers vegetables
on the roads they will
sell..or as housekeeping
in a five star hotel
will they become
doctors scientists
i cant tell ,,to make
money they need to
become a politician
or a corrupt cop
a thought in a nut
shell to excel

Email ThisBlogThis!Share to TwitterShare to FacebookShare to Pinterest
Labels: Our Municipal School Is A Prison Cell 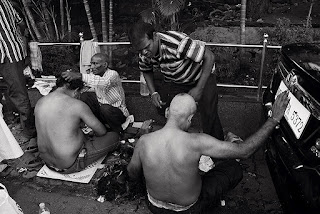 Street photography is an individual choice and may differ from person to person.. we see the same thing cosmically but differently too.. earlier I shot a frame now I see several frames ,,so I take a shot and if it is interesting , if it has a story to tell I shoot a video , as a corollary to my main thought ,, street thought .
I will not deny I get a kick shooting barbers , they are like painters working on the canvas of a mans head , their magical scissors instead of brush and the razor ,, if you see a barber they way I see him it is a creation of a work of art...and these humble souls are million light years from hair stylists ..the sad part is that seldom will a street barber evolve into a stylist, he will not work in those small cupboard like stalls , he loves freedom and moves about fishing for clients.
Sometimes I see him sitting in a corner eating his lunch.. dal roti and a piece of raw onion, he smiles at me invites me , but I thank him politely refuse , his meal is not enough for one person.. but that is his humility his culture to offer ..despite being a poor man.
And they know I meet them every year at Pitru Paksha all barbers day at Banganga Walkeshwar , and I shoot them , earlier there were less barbers but now there are many ,, actually I should have come here at 4 am but I come after 6 am so I lose out on my barber shots and shooting them in bright sunlight is being harsh on my aspect of street photography ,, now I dont go overboard I know when to stop..
Most of the North Indian migrants who come to perform this Paksha Shradh ..offerings of pind to their dear departed ancestors know me too ..I mean I could never imagine not shooting this event ,, come what may.
I shoot it spiritually barefeet , and I pay reverence to their rituals , I never ridicule mock a persons religious identity and this is nothing to do with Hindu or Muslim divide ,, I shoot Hinduism as passionately as I cut my head on Ashura day.. because every person loves his faith and I as a documentarist faithfully depict it as I see it more as a poet less as a photographer ,, this is where photography ends and poetry of visuals takes over ,,,poeticizing your pictures from within and without is the essence of street photography.
This time I took a friend an eminent agriculture economist with me , he had never seen this in his life so it is important you share your pictorial experiences with others not greedily shooting only for yourself.. and as I am not into selling my pictures or building a stock library I have no qualms ,,but I am incapable of taking people on a photo walk.. I am a illusionist ,,I loner and sometimes avoid crowds within a crowd ,, I would tell my friend what to shoot , shots that are rare but I let him make his choice ,,
There are street barbers near my house at Lal Mitti Bandra Reclamation , every time I take a bus to go to town I shoot a few frames ,,and as I have segregated my street stories or blogs into sets it is much easier though the main mother board is street photography ,, all my roadside religious shots too could be termed street photography , but I placed them in my diverse religious sets .
Barberism is my barber set my humble tribute to the forgotten street barber walking on foot sometimes on cycle working in the slums and earning by the sweat of his brow.
I have not shot the street barber doing Khatna circumcision ,,most of the Muslims do it in the nursing home hospital when the child is born.. but the poor get it done by the Hajam the colloquial name of the street barber .
Predominantly the hajam street barbers are migrants from Uttar Pradesh.. some get jobs in salons as helpers assistants and work their way up.. some live and die on the streets as street barbers ,,
By Firoze Shakir Photographer No1 - November 06, 2015 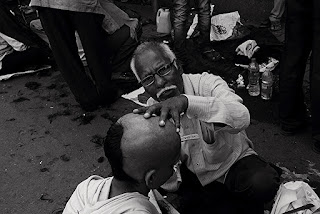 The only irony is that those who took his vote in the name of Dalit progress and development those Dalit party leaders are now all multi millionaires ,,glued to their chairs ,,, the pain of the street barber lowest of the lowest class with you I share politically conned ensnared ...while some leaders to mock them 10 lac rupee suits wear ... as the barber stares ,,,his downtrodden broken down fence of life ,, even god cant repair ,,,
do remember him in your prayers ,,
By Firoze Shakir Photographer No1 - November 06, 2015