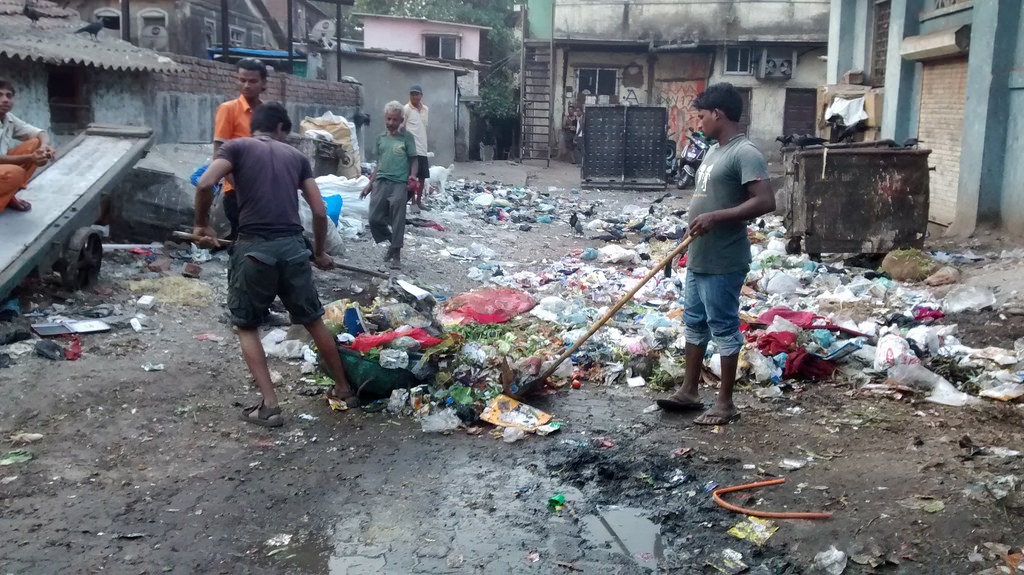 with so much money
in their coffers now
what is their excuse
the workers were
grumbling seeing
the dug addicts
drunks on this
mound of despair
happily drinking
booze  while they
worked slogged
clearing the shittiest
garbage without shoes
no masks no gloves
susceptible to disease
swine flu dengue our
local representatives
should use this place
as a party office venue
all this garbage will
disappear this place
will become new
perhaps build a
children s park
paint it sky blue
but really who
cares a shit
it was this garbage
that sent the congress
packing it could happen
to you too.. over the heads
of the congress the voter flew
how this got decimated they
were left wondering without clue

Email ThisBlogThis!Share to TwitterShare to FacebookShare to Pinterest
Labels: The Conservancy Staff Of Bandra Municipality No Gloves No Masks No Shoes

Garbage Is Nirvana At Bandra Reclamation 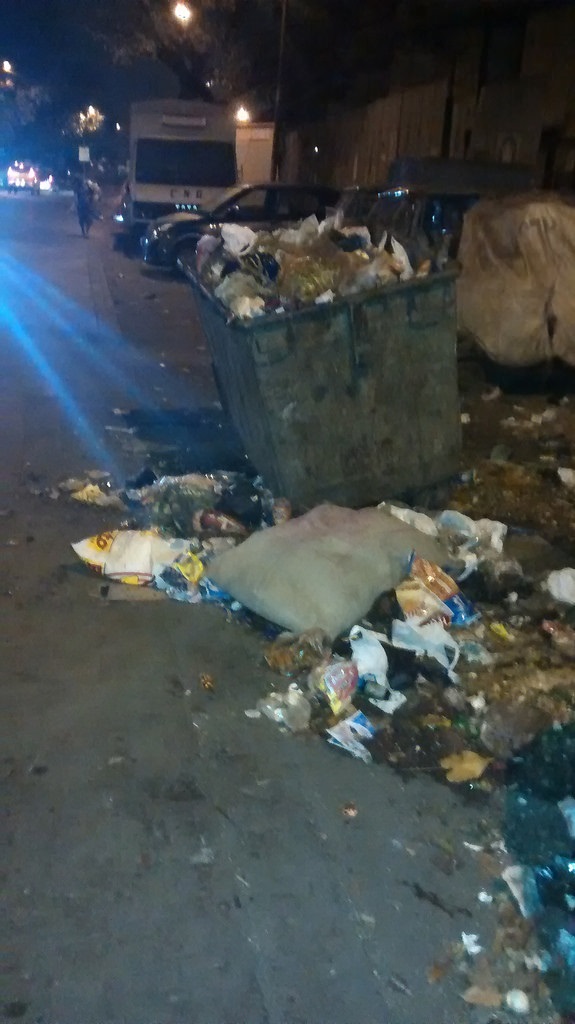 I left my house at  6 am and first shot this iconic garbage bin near the  open toilet dump off Rang Sharda.. I now know most of the dumping sites of Bandra west .

At 6.20 I reached the end of Bandra Reclamation I shot another garbage bin and the area round this last bin is deplorable adjacent to Agasty building.

I reached the MET Gardens at  6.30 did 11 rounds and at 7.30 entered the Gen Arun Kumar Vaida park for my free hand exercise and after 15 minutes walked home again shot the Bandra Transit Camp garbage , than took a short cut to Bandra Bazar via the Sunni Masjid met a butcher friends son coming out of the Mosque and educated Muslim told him of the garbage close to the Mosque , he said he pays people to clean it but people throw garbage in the night , he has a butcher shop off this iconic garbage site .

Than I shot more pictures of the ugliest dump of Bandra Bazar this time the Municipal conservancy staff were cleaning this horrid horrendous dumping site and they were grumbling they dont have gloves , safety shoes masks .. and than I wondered with so much money with Mumbai Municipality and the call of Swach Bharat by our erstwhile PM Mr Narendra Modi why is the Mumbai Municipality not taking it seriously ,,
And Modijis Swach Bharat Abhiyan at Bandra Bazar and Bandra Reclamation and in the Bandra slums is an utter failure and why does our dynamic Chief Minister Mr Devendra Fadnavis not take action against the shoddiness and sloppiness of the Bandra Municipality beats me ..

And Bandra Bazar is a BJP new stronghold , which the Congress lost the same reasons of neglect and apathy. I think the CM and our local representatives should wake up to this menace to society , open garbage house of swine flu dengue and other garbage related ailments .

And these pictures I shoot are as is where is but as the Bandra Municipality is not on the web or even on Twitter they will never see or read my blogs ,.

As a senior citizen photographer  poet I shall keep on poeticizing the pain of the Bandra Am Admi .. shooting garbage pictures every morning when I set out for my walk at Bandra Reclamation.

And there are a lot of pictures ahead all shot on my handy Motorola G..No Nexus Plexus or Sexus.

The Coffin of a Ragpicker Is His Garbage Sack 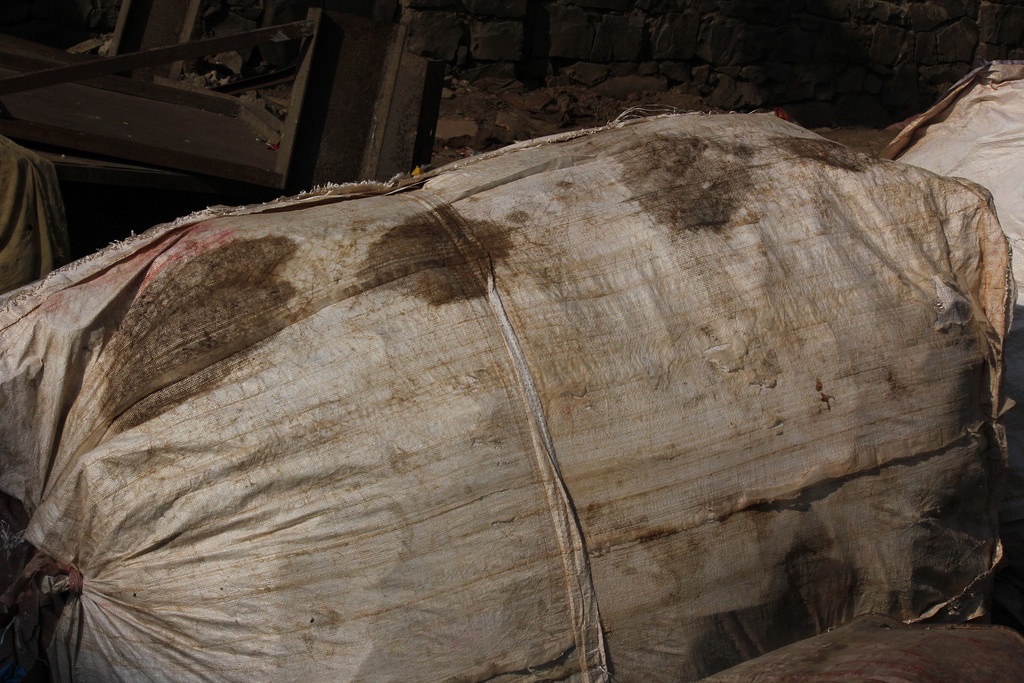 in which his last remains
they will hurriedly pack
take him to the dumping site
burn it as a stack as the fires
envelop it his body turns
black covered with soot
dreams of sweet smack
he is now happy that as a
ragpicker never will he ever
come back..he never wanted
in his bank account the 15 lacs
he will miss meow meow brown
sugar and the smell of crack
his clothes wont be auctioned
nor his sack..no fear of any
religious whiplash his job
no one can ever hijack
will there be garbage in
hell or heaven he wonders
a glint of a smile he holds back
god who created the greatest
garbage humanity has finally
called him back ..curry roads
ragpicker bent hunchback

Email ThisBlogThis!Share to TwitterShare to FacebookShare to Pinterest
Labels: The Coffin of a Ragpicker Is His Garbage Sack

When Ragpickers Die No Comets Are Seen 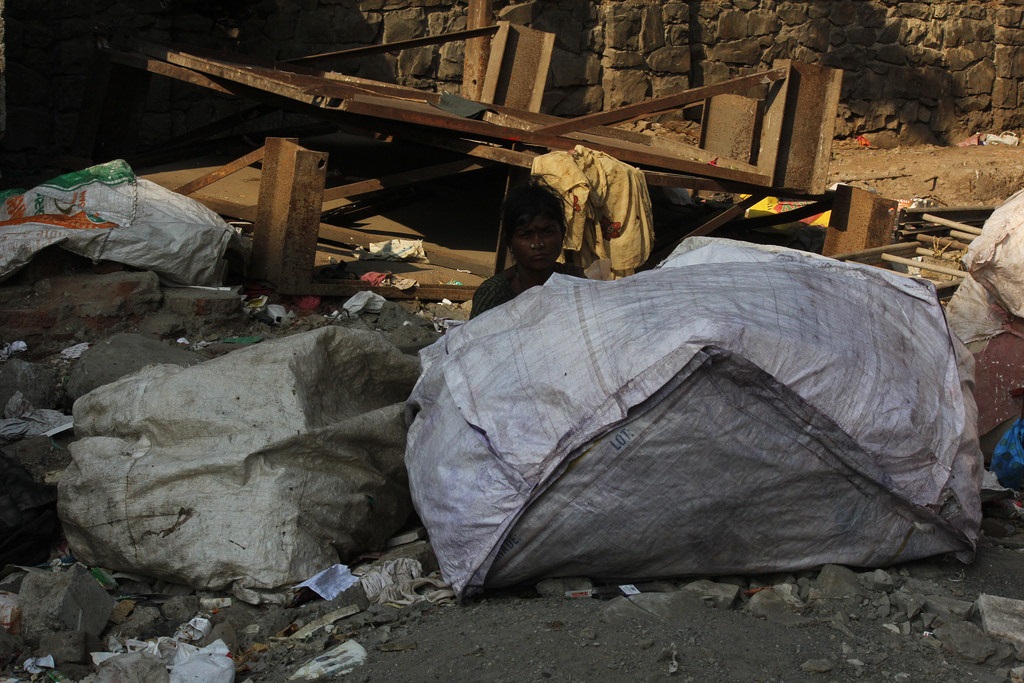 worse than the life of the beggars
living dying among the unclean
the filth the stench deplorable
demoralizing scene on the other
side of the fence the beggars life
is evergreen,, they beg and move
on to work slog like the ragpickers
they are not very keen a ragpickers
job the beggars soul would demean
working without gloves the ragpicker
dies of wounds gangrene  but sir
who really cares ..yet they keep our
city clean  the Mumbai municipality
has lost its sheen making our beloved
Mumbai the Quintessential Garbage Queen

Email ThisBlogThis!Share to TwitterShare to FacebookShare to Pinterest
Labels: When Ragpickers Die No Comets Are Seen

He Came From Orissa To Follow His Dreams ,, He Is A Bandra Ragpicker 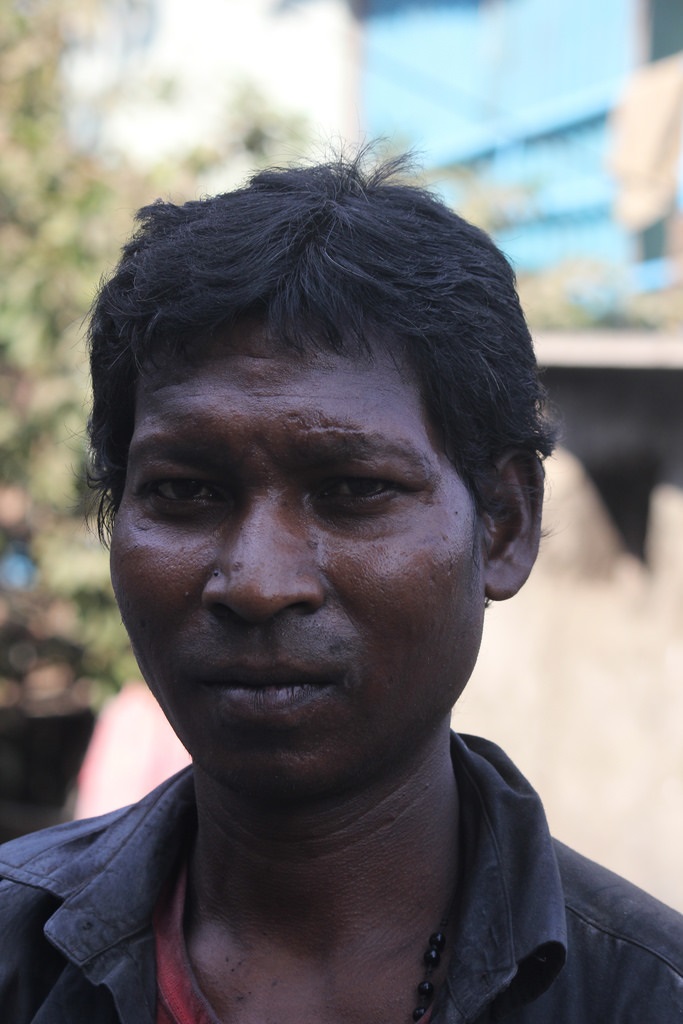 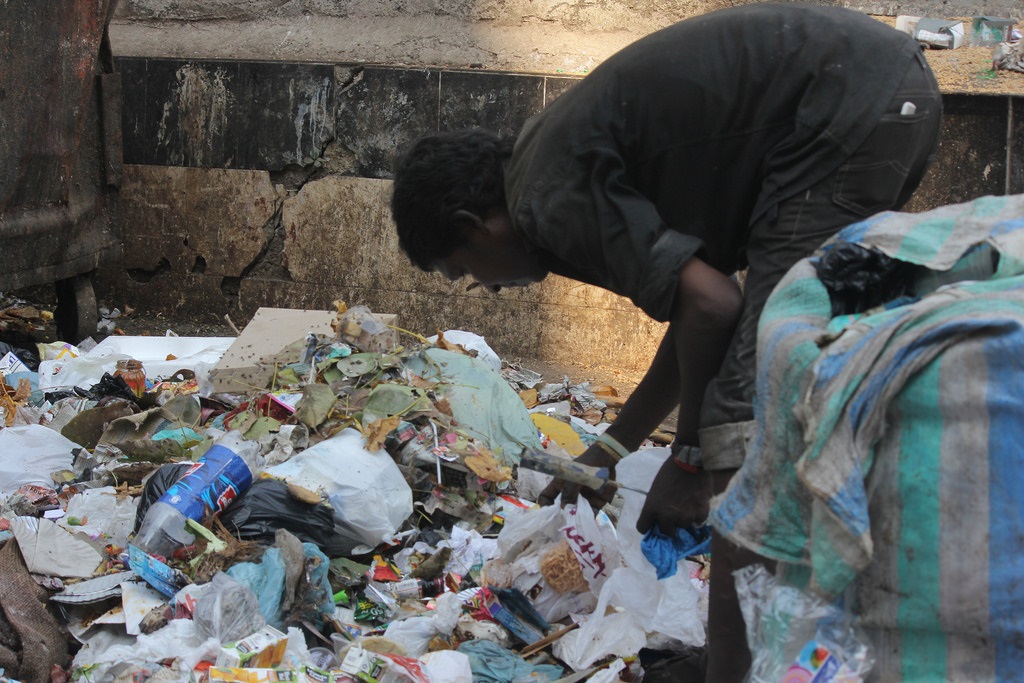 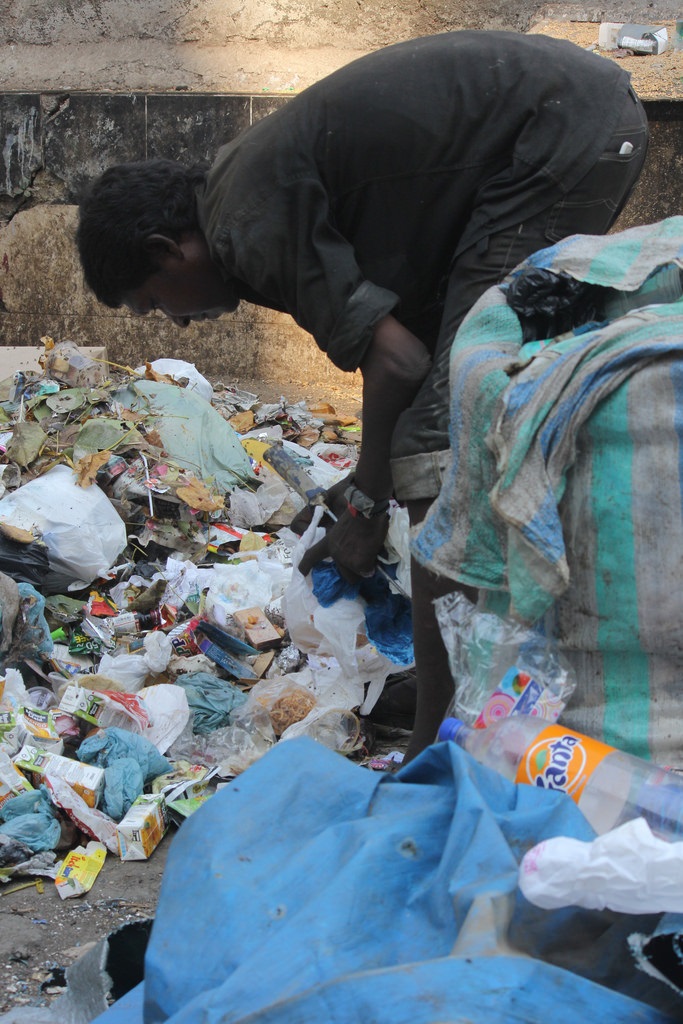 He was wondering why I called him out he was sorting garbage ,scavenging for items to sell .. near the garbage site close to my house and bang opposite the Bandra BJP office adjoining the Indraji Nagar slums .. And I sometime wonder is it Muslim slums that generated the maximum filth .. all Muslim slums be it the Nargis Dutt Nagar Shastri Nagar Bandra Station , Bandra Slaughter House are deplorable unattended by the Municipality .

Most of the dumping site like Shastri Nagar  Bandra and Bandra Bazar road are meeting places for drunks drugaddicts and the Bandra cops know it too but than they wont dirty their hands catching scums that have nothing to give or live for .

And so back to Sudip from Orissa , he was hesitant to talk to me but I was dressed in normal clothes and did not look like a cop or a Sufi monk.

He works odd hours and this garbage site is his normal beat ..he earns about 300 per day scavenging plastic , metal stuff and other odds and ends .

He eats food at the stalls and survives on tea .. I did not ask him if he was a drug addict.. or the interview would have abruptly stopped .

And I am now seriously documenting the unknown ragpicker who does a great service to selfish society.. he does it passionately with devotion than the highly paid Municipal sweeper .. with reasonable hours great perks .

As for our ragpicker who the fuck really cares for him , he is a social stigma ,an untouchable in all reality ..the ministers talk discuss about the dumping grounds of Kanjur Marg and Mulund do they discuss about ragpicker Tamil ladies , men children besides this motley crew of drugaddicts .

And as a street photographer I need fodder for my blogs .. and so I train my lens on these lowest of the low scavengers ,, and some of them because of their drug intake can be violent hyper and volatile ..and they dont trust anyone but their own.

They are dirty , unclean and some have gangrenous wounds  they get treated at Bhabha Hospital and beg outside St Peter Church..and Jesus is the only God with compassion they identify with his followers who give them food alms ..

I met a mother son duo a few days back the son was about 10 years old assisting his mother  searching for Hope in the over spilling garbage bins ,,

The corporators ministers who go on foreign junket to learn about sewage and other facilities .. dont they learn something about garbage management that could help Mumbai city of Garbage bursting at the seams ..I am really astonished at the waste of public money without any accountability without any returns ..

And now that Mr Sharukh Khans Ramp has been duly demolished can we get back to Bandra .. The Christians are happy its time they made all of Bandra happy too..