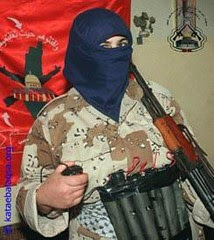 “A bomber wearing an explosives vest in a poetry forum detonated the bomb, the source said.”ASF NEWS

“A few hours back a radical blew himself up in a poetry forum of white
men and women. The alleged suicide bomber was of Somalian descent, this devastation was horrendous no survivors…
The end was bitter, an unfinished poem was found on his person..” bcb news

I Abdullakasai ask you Why?
The Killing fields of Poetry
Eye for an Eye
Infidels of Poetry for the greater glory
Of a Terrorist God you all must die
Oh how you made me cry..
My blackened balls you did fry
You did not listen to my sermons
much did I try
now come built another
Forum in the sky
Relive a lie
A tear a sigh
Safe passage
You won’t have to buy
I did convert you
By and Bye
Trade Martins Questions
I will answer and reply
Cybernetic minarets of hate
As stand by
A muezzins
Call to fight thereby
Lal Masjid lives
In the Heart of this Sepoy
By firoze shakir - September 04, 2007

A Govinda that I shall miss 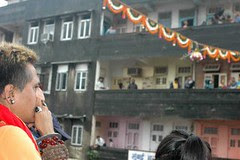 A Govinda that I shall miss
Originally uploaded by flickr photographerno1
Tomorrow is Govinda along with Ganpati my favorite festival I try not miss under any circumstances, but I have to leave for Bangalore early morning for an urgent official work.This will be the first time I shall miss the Dahi Handi feast.
My usual pictorial pilgrimage started first from Lalbagh than to Dadar Ranade Road after shooting all this I walked from Dadar to Bandra barefeet shooting smaller ones in squeaky streets , at Bandra I shot the Bazar Road Govinda , and this was one festival I kept alive through my pictures.
I will be in the train away from the sounds of Govinda Ala Re Ala

This picture was short by Gautam Singh of AP who is a young photographer just arrived newly from Bangalore to Aamchi Mumbai, .. and I came to Dadar Ranade Road at about 10.30am today and it was not as crowded due to the non stop incessant heavy rains, and this building is all photographers favorite haunt and you get a view of two or three Dahi Handis, but what kills you is on the road they throw huge buckets of water and water balloons and I am mostly an ideal target for conspicuosity of attire , this time I did not wear my turban, I shifted base from one building to the other but my pictures are bad due to a foccussing problem I think and this is a recently repaired Nikon AF35/70 lens3.5, there was my 80/200 Nikon ED 2.8 but I was worried about water getting into it , it was jut out for watered punishment...I shot the ladies Govinda, and walked and shot one at Mr BW Jatkar my photo gurus house and the last one at Bandra Bazar Road .. aI was carrying just the Nikon D70.. only.
So with this I begin my Govinda Series.

Gokul Ashtami is celebrated in August - The birth of Lord Krishna. Most devotees fast till midnight and when the birth of Lord Krishna is announced, they eat a festive preparation of rice, butter, yogurt, puris and potatoes. This meal, according to Hindu mythology, was relished by Lord Krishna and his playmates in Gokul. Young men form human pyramids to break pots of curds strung high up from buildings. In the villages, the Pola or the harvest festival is celebrated in which bullocks are bathed, decorated and taken out in a procession to the accompaniment of beating drums.
The Ceremony of Dahi-Handi
During this ceremony a large earthenware pot is filled with milk, curds, butter, honey fruits etc. and is suspended from a height between 20 to 40 feet. Sporting young men and boys come forward to claim this prize. To do so they construct a human pyramid by standing over each other's shoulders till the pyramid is tall enough to enable the topmost person to reach the pot and claim the contents after breaking it. Normally, currency notes are tied to the rope by which the pot is suspended. This prize money is distributed among those who participate in the pyramid building.
courtesy :