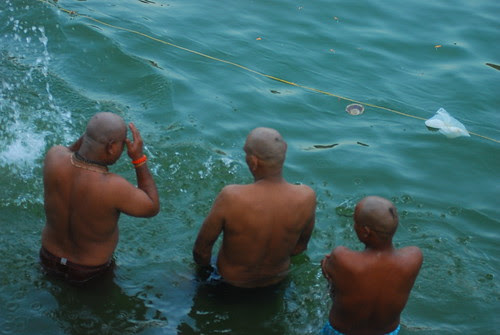 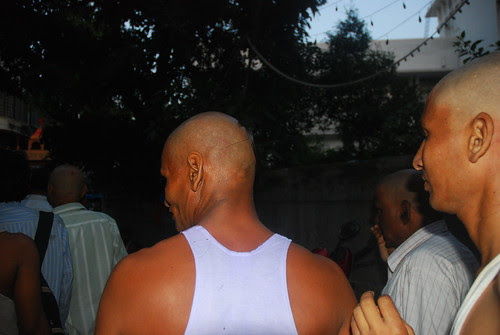 Pitru Paksha (Sanskrit: पितृ पक्ष), also spelt as Pitr paksha or Pitri paksha, (literally "fortnight of the ancestors") is a 16-lunar day period when Hindus pay homage to their ancestors (Pitrs), especially by food offerings. This death rite is known as Shraddha or tarpan and is considered as an inauspicious ceremony. In southern and western India, it falls in the Hindu lunar month of Bhadrapada (September-October), beginning with the full moon day (Purnima) that occurs immediately after Ganesh festival and ending with the new moon day known as Sarvapitri amavasya or Mahalaya amavasya. In North India and Nepal, this period corresponds to the dark fortnight of the month Ashwin, instead of Bhadrapada.[1]

According to Hindu mythology, the souls of three preceding generations of one's ancestor reside in Pitru-loka, a realm between heaven and earth - governed by Yama, the god of death - who takes the soul of a dying man from earth to Pitru-loka. When a person of the next generation dies, the first generation shifts to heaven and unites with God and are thus not given Shraddha offerings. Thus, only the three generations in Pitru-loka are given Shraddha rites, in which Yama plays a significant role.[5] According to the sacred Hindu epics (Itihasa), at the beginning of Pitru Paksha, the sun enters the zodiac sign Virgo (Kanya) and at this time, it is the believed that the spirits leave Pitru-loka and reside in their descendants' homes a month until the sun enters the next zodiac Scorpio (Vrichchhika) - the next full moon. Hindus are expected to propitiate the ancestors in the first half - the dark fortnight.[3][6]

When the legendary donor Karna died in the epic Mahabharata war, his soul transcended to heaven where he was offered gold and jewels as food, but Karna needed real food to eat in heaven. He asked the lord of heaven, Indra the reason for serving gold as food. Indra said that Karna had donated gold all his life, and never donated food to his ancestors in Shraddha. Karna replied since he was unaware of his ancestors, he never donated anything in their memory. Karna was allowed to return to earth for a 16-day period, when he performed Shraddha and donated food and water in their memory. This period is now known as Pitru Paksha.[7][8]
[edit] Importance

Shraddha by a son in Pitru Paksha is considered a must for the ancestor soul to attain heaven. In this context, the scripture Garuda Purana says "there is no salvation for a man without a son".[5] The scriptures preach that a householder propitiate ancestors (Pitris) along with the gods (devas), ghosts (bhutas) and guests.[2] The scripture Markandeya Purana says if the ancestors are happy with the shraddhas, they will bestow upon the performer health, wealth, knowledge and longevity and ultimately heaven and salvation (moksha).[3]

Shraddha performed on Sarvapitri amavasya can also compensate for a forgotten or neglected annual shraddha ceremony, to be held on death anniversary of the deceased. According to Sharma, the ceremony is central to the concept of lineages. Shraddha involves oblations to three preceding generations, by reciting their names as well as to the mythical lineage ancestor (gotra), thus a person in his life gets to know the names of six generations in his life: three precding generation, his own and two succeeding generations - his sons and grandsons.[2] Usha Menon presents a similar idea: pitru paksha emphasizes the fact that the ancestors and the current generation and their next unborn generation are connected with blood ties. The current generation repays their debt to the ancestors in pitru paksha. This debt is considered of utmost importance along with a person's debt to his gurus and his parents.[9]
[edit] Rules of shraddha
[edit] When and where

Shraddha is performed on the specific lunar day in Pitru Paksha, when the ancestor (usually parents or paternal grandparents) was deceased. There are exceptions to the lunar day rule, special days are allotted for people who died by a particular death or their status before death:[3][5]

* Chautha Bharani and Bharani Panchami - the fourth and fifth lunar day respectively - is allocated for people deceased in the past year.
* Avidhava navami ("Unwidowed ninth") - the ninth lunar day is for married women, who died before their husband. Widowers invite Brahmin women as guests for their wife's shraddha.
* The twelfth lunar day for children and ascetics, who had renounced the worldly pleasures
* Ghata chaturdashi or Ghayala chaturdashi - the fourteenth for people killed by arms, in a war or suffered a violet death
* Sarvapitri amavasya - ("all father's new moon day") is meant for all ancestors, irrespective the lunar day they died. It is the most important day of the Pitru Paksha and those who forgotten to perform shraddha, can do so on this day. The shraddha done on this day is considered as fruitful as one done in the holy city of Gaya.[3]
* Matamaha ("Mother's father") or Dauhitra ("Daughter's son"): It is the first day of the month of Ashwin and beginning of the bright fortnight. It is assigned for shraddha of the maternal grandfather by the grandson.

The ritual is also held on the death anniversary of the ancestor. The shraddha is performed only at noon, usually on bank of a river or lake or at one's own house.[5] Families may also journey pilgrimage places like Varanasi and Gaya to perform Shraddha. Gaya considered sacred to perform shraddhas, holds a fair in Pitru Paksha.[10][3][4]
[edit] Who and for whom

Shraddha has to performed by the son (usually the eldest son) or male relative for paternal section family, limited to preceding three generations, however on Sarvapitri amavasya or matamaha, the daughter's son can offer Shraddha for his maternal side of the family if a male heir is absent in his mother's family.[5][3] Some castes only perform the shraddha for one generation.[3] The male who would perform the rite, should have undergone the sacred thread ceremony. Since the ceremony is considered inauspicious, in the royal family of Kutch, the king or heirs of the throne are prohibited to conduct Shraddha.[5]
[edit] Food

The food offering to the ancestors is usually cooked in silver or copper vessels. It is usaully on a banana leaf or cups made of dried leaves. The food must include rice Kheer - a sweet made of rice and milk, lapsi - a sweet porridge made of wheat grains, rice, dal - lentils and the vegetable of spring bean (guar) and yellow gourd (pumpkin).[5]
[edit] Rites of shraddha

The male who performs the shraddha, should be purified by a bath and is excepted to wear a dhoti. He wears a ring of darbha grass, in which the ancestors are invoked to reside. The shraddha usually is performed bare chested, as the position of the sacred thread worn as the person has to be changed a number of times in the ceremony. The shraddha involves pinda-daan - offering of pindas (cooked rice and barley flour balls mixed with ghee and black sesame seeds) with the release of water from the hand - to the ancestors. It is followed by the worship of gods Vishnu in form of the darbha grass, a gold image or Shaligram stone and Yama. This is followed by offering the food, specially cooked for the ceremony, on the roof. The offering is considered as accepted if a crow arrives and eats the food. The crow is considered a messenger of Yama or the spirit of the ancestors.[3] A cow and a dog is also fed. Brahmin priests are offered food and then after the ancestors (crow) and the Brahmins have eaten, the family members have lunch.[5]
[edit] Mahalaya
Mahalaya marks the formal beginning of the Durga Puja festival

Mahalaya (Bengali: মহালয়া), is the last day of the previous fortnight Pitri Pokkho (Bengali: পিতৃ পক্ষ, ‘Fortnight of the Forefathers’, the day is marked by recitation of Devi Mahatmyam (Chandi Path), and signifies the beginning of Durga Puja festivities. Bengalis traditionally wake up at 4 in the morning on Mahalaya day to listen to Mahisasura Mardini in the enchanting voice of the late Birendra Krishna Bhadra and the late Pankaj Kumar Mullick on All India Radio as they recite hymns from the scriptures from the Devi Mahatmyam or Chandi. [8][11]
[edit] Other practices The road from Walkeshwar moving towards the narrow path of Banganga Tank becomes an open air barbers haunt , a winding line of saloons on the roadside.

The guy who used to sell peanut and gram at Dadar Chowpatty today wields a razor , he has become a barber to fill in a demand here on Pitru Paksh day, when on a day before Navratra the Bhaiyya population of Mumbai, or North Indians as they are politically called, or UP migrant comes here to appease the soul of his ancestors and pay tribute to their memories with religious tonsure.

I have a set on Flickr Barber Shots , and another one called Religious tonsure , my tryst with tonsure began at Haji Malang.

The guys who have their head , and face shaved including their armpits , sit on the rad for this ritual, the barbers charge over Rs 101 or more depending on the Bakra..or sacrificial lamb.

On the way ahead there is a salon that does brisk business with two chairs , he charges a bit more for the hygienic conditions, but honestly where spirituality is concerned there is no fear of hygiene .. God takes care of it all.

God is the greatest healer of anything done in his name , I cut my head with a sword during Ashura Moharam, I am a insulin dependent diabetic , I bleed profusely but my head heals in a day or two.The same thing with piercing 18 feet roads through the cheeks at the Maryamma Tamil feast or walking on fire.. This happens only in India.

Most of the barbers kept shouting at me Bam Bam Bhole Nath because of my Tiger print , turban and saffron attire ..I was barefeet too that added to the charisma of my persona .

I missed this event for about a few years and I shot a 3 GB card , I could have gone on , but I was tired , dehydrated and it was my 27 fast of Ramzan.

There were a few photographers around , but that is because I was here to catch the early morning light, I left the place by 9 am..

My Guru Shreekanth Malushte came in later I missed him..

There were several known faces of the Pujaris and thread sellers , most of them remembered me from my earlier trip.

I also told you in the Introduction about a Muslim bearded man who had come to give company to his Hindu friend performing the Puja on the banks.The Muslim man was fasting like me and had kept awake for the Badi Rat the night before , but he was happy for his friend , both were from Andheri Millat Nagar.

So this is the canvas of secularism, fraternity that one finds in a mixed cauldron of Amchi Mumbai.. promoting tolerance and mutual existence..devoid of hate for the other mans ritual or culture..

Ramzan Navratra Mount Marys feast all going hand in hand and law and order brilliantly taken care by the officers and cadres of the Mumbai Police..Indias No1.

I shot these pictures on the day I was going to shoot the Durga workshops of Lalbagh.
Invariably whenever I have ventured out for an important photo shoot I have encountered hijras on my path.

My hIjra guru told me this is a Hijda Vardan, my destiny interlinked with the angst of the Hijras.

On my way to shoot the Pitru Visarjan yesterday I again met a Hijra begging in the train that was taking me to Grant Road.

Otherwise I have not met hijras since a very long time. 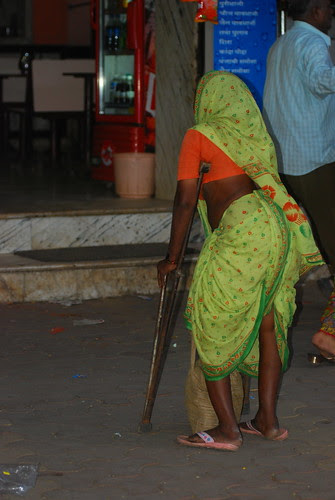 
to vinod mirani my very old friend who has always remained young at heart... 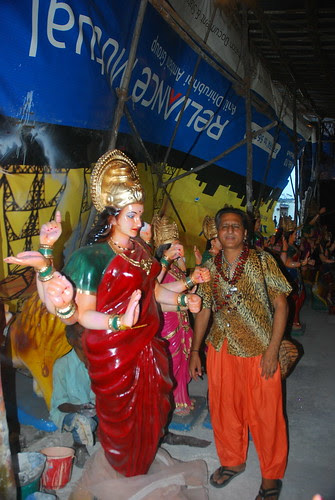