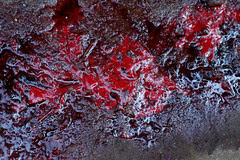 Bleeding Blogs
Originally uploaded by firozeshakirphotographerno1
On the soil of my fleshly existence
Bleeding to death for all to see
encrusted layers of my wordless poetry
Butchered carelessly
My body from my soul set free
My blogs running towards the gutters
Of an open sea
words clinging to pictures
of a compositional tragedy
the girl child impregnated
a child mother s depravity
the transgendered tears
of hijda their alternate sexuality
the naga sadhus ling kriya
shai snan their royal priority
the sufis cutting tongues
bulging eyeballs their
soulless sanctity
the shias
allah ho akbar
proclaiming hussainiyat
as their nativity
as for the enemies of shiasm
yazidiyat
misplaced martyrdom
within reach of their calamity
By firoze shakir - July 01, 2007 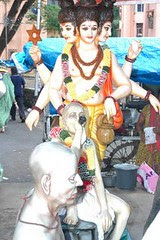 I am fascinated with Lord Shiva , so you see my proximity with the Naga Sadhus, this has nothing to do with my inherent nature as a Muslim .. but it is part of my cultural inheritance, I always wanted to visit Amarnath and Kailash Mansorovar, but somehow lack of funds, time always alluded me..but I know that Lord Shiva will give me wings to fly, shoot him , this I am certain..
I am still unquenched as I want to visit Junagadh on Maha Shivratri but each year, inspite of a genuine curiosity, it does not happen.
My Guru Shri Vijay Giri Maharaj of Shanti Ashram at Film City may one day take me with him..
I missed the Ardh Kumbh , inspite of having rail tickets that I cancelled inorder to celebrate my first Ashura in Lucknow , my last sadly so.
I promote Hinduism on my site.. as we have to learn to live and let others live too..
For my detractors who accuse me in Lucknow of doing this for Money from the Hindus s a greater insult to my upbringing as a Indian Shia Muslim…
But if some philanthropist Hindu takes me with him to Amarnath or Kailash Mansarovar I will not refuse.. his kindness and his generosity.
firoze shakir
photographerno1
By firoze shakir - July 01, 2007

Boran Road /Someone calls me Psychic 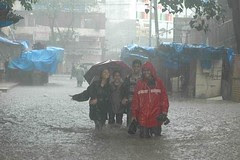 Boran Road /Someone calls me Psychic
Originally uploaded by firozeshakirphotographerno1
This is the famous Bandra Boran Road , placcid waters reaching out towards Bandra HillRoad on one end , the end facing the rain revellers , they are moving towards the Bandra Bazar Road , all knee deep , just to the right of them is an open 4 feet gutter , a red flag has been placed there last year , it is still there this year.
Stupid this is a last years picture dont you see.
My poems and my pictures are mostly off tangent I say one thing through my pictures I show another thing.

So now read my poem written last year at Buzznet ..

Someone calls me Psychic

Someone calls me a Prick

Someone calls me Burnt Out Wick

Someone calls me a Slippery Indian Dick

Someone calls me Satans Talking Stick

Someone calls me Zidanes Corner Kick

Someone calls me Poetic Ass Lick

Someone calls me Prostituted Prosaic

I scratch my Balls , my Nose pick

Such friends that I did not hand pick.

a cracker under the stove of my ass

of a Goddess of a Confusing Chick

at flickrs makes me homesick 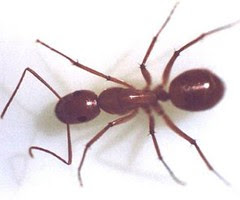 The Muslim Woman at Her Grave 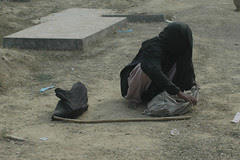 the Muslim Woman
sits and begs
watches humanity as it passes by
she was born to live she will live to die
her hanky soaked in a muffled cry
allah ho akbar there is more
than sectarian hate in Islam
than meeets the eye
grandiose masjids touching the sky
madarssas bloom manafacture lies
the muslim woman
chauvinistic male Mullahdom
her rights deny
ignorance the Jihad
turned a Nelsons eye
the Crescent weeps
with eyes dry
muslims love killing muslims
a thought underlie
can we ever as Muslims unify?
our priorities that we misapply
the muslim woman
the perfect scapegoat to crucify.
By firoze shakir - July 01, 2007 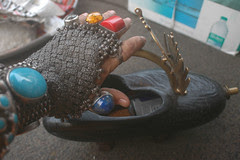 A Beggars Bowl
Originally uploaded by firozeshakirphotographerno1
This was a poemless picture at my homesite I shall fill it as a poem here at Flickrs..

treacherously tattered tear stained soul
a little speck of dust you made it whole
what is godiness without you
in my wretched beggars bowl
a navajo princess pride and vanity
a dead indian beneath the totem pole
stitched lips of silence words unroll
By firoze shakir - July 01, 2007 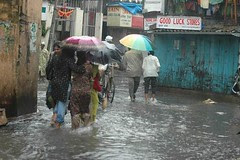 yet to be born

This is a picture shot last year , this is Bandra Bazar road, today was the same , rains flooded the area, gutters weeping , vomitting filth, luckily I have taken a sabbatical from bare feet walking because of my diabetes , soaring sugar evels, one never knows what might prick me .
I shot pictures on negs on my F100 this morning 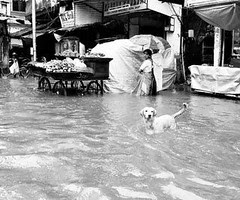 Dog Day Afternoon
Originally uploaded by firozeshakirphotographerno1
Bandra Bazar Road
flooded emotions in a swoon
from the Municipality
this is a yearly boon
open gutters
choked storm drains
unlike the craters on the moon
Oh to run away from Mumbai
settle in Dehradun
kids in Sherwood College
born with a silver spoon
but then on second thoughts
it is Mumbai just Mumbai in Monsoon
the rains seminal drops of a honeymoon
only the spolit sport municipality
keeps bursting this balloon
yet the resilient spirit
of a Mee Mumbaikar
the lovely month of June
when our beloved city
turns into a Blue Lagoon
Fuck Shangai Fuck Venice
Pedestrian cities out of tune..
no tsunami no typhoon
it is Mumbai Manoos
he whistles sings and croon
Yeh Hai Mumbai Meri Jaan
Baki Sab Lampoon.
The Whispering Venus
on the Sultry Mound of her Dune
Bollywoods Most Wanted
a poet a photographer a blogger
caricatured as a Cartoon
By firoze shakir - July 01, 2007 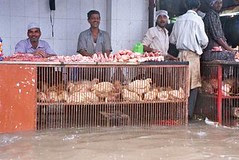 Slumbai Mumbai Shangaied
Originally uploaded by firozeshakirphotographerno1
Our city fathers keep unnerving us each time they want to make Mumbai into Shangai..
The Rains come we look like Venice , cars floating like Gondolas, making love in the car on the back seats during floods , with a juicy Bhuta maize in hand is the best kick, a horny guy who deals in stolen car parts at Chor Bazar was telling me...It gave an extra kick , he is already married this he was talking about his maid servant who accompanies him to buy chicken at Bandra Bazar Road..
Wife is in bed enwombed to her 9th kid expected any day like the torrential rains...
Bandra Bombil wadi, near Hill Road has sleepy East Indian cottages, this morning it was a stream kids swimming under the shadow of the Cross, Jesus watching uninterestedly , He watches this tamasha every year, this is the only Cross close to a gutter that has pigs paying homage to the Messiah.
They call it Bandra's Bay of Pigs.
I came out from this lane into a water gushing, snotty brown muddy, phlegm gurgling Bandra Bazar Road..suffering from tuberculosis, nothing had changed , ..
Bandra Bazar Road residents take all this in their stride, the new independant corporator was not around, the old Congress I corporator he got inundated in the hustings..totally washed out...hook line and sinker..
The next elections in Mumbai will be very crucial ones people expecting better amenities, better governance and better and not bitter Disaster Management.
Our life during the rains is exactly like the chicken in the coop , the butchers are smiling with Municipal grins.. we are dead either way..
By firoze shakir - July 01, 2007 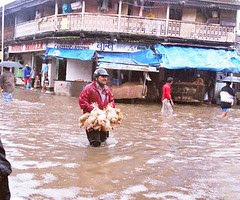 Mumbai Chikened Out
Originally uploaded by firozeshakirphotographerno1
This was shot last year , today I shot pictures too on negatives on my F100, the situation is te same, gutters choked, water logged , man stranded , this is Bandra Bazar Road, I did not venture any further , to my shop and bachk home.Disaster Management a total hogwash.
The Ad Guru Alyque Padamsee appealed to our Chief Minister to come lead the helpless from the front , take a dip in the unholy waters of this Maha Mumbai Kumbh.
This picture is not very far from where I stay, all these pictures are on my homesite a gallery of pain called Bandra Bizarre Road.. Bandra Bezar Road..but Bandra Bazar road all the same..
I copy a few excerpts from kind courtesy :
www.ndtv.com/convergence/ndtv/story.aspx?id=NEWEN20070017...

There was chaos at the Mumbai airport with no flights landing or taking off till late afternoon.

The airport has now reopened but with a huge backlog of flights many passengers are still stranded.

The weather office has forecast more rainfall throughout Saturday.

The Army has been kept on standby in Kalina, one of areas which was worst affected by the 2005 rain disaster.

The Mithi river, which had flooded in 2005 is rising and authorities have said that people living near the river may be moved out if levels continued to rise.

Given the gravity of the situation, Maharashtra Chief Minister Vilasrao Deshmukh has ordered all officials related to flood control to stay in office for the next 24 hours.

Trains on the Central and Harbour lines have been halted and services on the Western line are running behind schedule.

Schools shut down abruptly and students turned back home in the showers.

The Education Department has extended the date for junior college admissions for Mumbai, Thane and Raigad to July 2 due to heavy rains.

Slums in several areas of Mumbai, including Asia's largest slum Dharavi have been submerged.

Mumbai Municipal Commissioner Jairaj Phatak has said the city storm water drains had capacity to cope with upto 40 mm of rainfall but over 178 mm of rainfall has already been recorded.

In thane, two persons have been electrocuted. The Fire brigade is having a tough time attending to calls of heavy flooding in the low-lying areas, from where people were shifted to safer places.

Slums in the city were also inundated.

A building in Malad was evaucuated after fears it might collapse in the bad weather.

The BMC has said its disaster management teams are working to free drains to let the water recede.

In Sangli the level of river Krishna is rising steadily due to heavy showers.

The river level is at 36 feet and inching closer to the danger mark of 45 feet .

There are reports of water entering low-lying areas along the river and villages being cut off due to flooding.

Reliance Energy and BEST, providers of power in the city and suburbs, have cut supply in various places, particularly low-lying ones, as a precaution.

The army has been called in to help with rescue operations in the Konkan region.

Water stood at four-feet level in the streets of Mahad region in Raigad district.

About 1000 people were evacuated to safe places and two people reportedly died after a landslide.

Water level in Krishna river touched the 36 mark, but danger level is 45 and the water is rising.

Flooding also cut off five villages in the region. "

Back to my Bandra Bazar Road, nothing has changed much, misfortunes is our lot, we the eunuched souls that once in a while called Marathi Manoos, Mee Mumbaikar...
We weep like the rains as they fall on our heads and remind us of out Municipal Mortality..
The Municiplaty kills us much before God does...
By firoze shakir - July 01, 2007