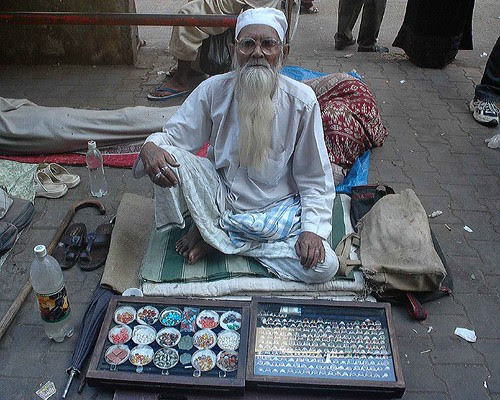 This was shot a long time back on the pavements of Bhendi Bazar , this is the next pavement from where the other gemstone dealers sit , he is an old gemstone dealer he has two sons Mohomed and Irfan, both do good business on a stall next to his, both are comfortably well off , and the old man need not work at all, but he refuses to be made captive and sit at home , he told his sons he will earn his livelihood , so what he makes on the street sustains his self respect and dignity.

This is the beauty of Islam , the actual beauty of Islam, showing it by exemplary deeds , so I shoot Muslims like him who earn their livelihood by the sweat of the brows , instead of those with hand and feet , who take their wives and kids and beg outside hotels where Arabs stay.

The tourist Arab has actually corrupted the soul of India , most of them came here for cheap fucks , cheap disposable marriages in collusion with rogue mullahs and pimps..and bringing their sick relatives for medical care gave them the legitimacy to do all this on the side..

I stayed at Strand Cinema near Arthur Bunder Road which was a paradise and haven for these kind of Arabs , I remember Ideal Cafe Slip Disc.. and the sleazy by lanes of Radio Club , the lodges where all this happened..

The road behind Taj Mahal hotel near Baghdadi Hotel ..where mostly these Arabs hung out..

That is why I shoot blind Ismail Chacha contemporary of Haji Mastan , Ismail Chahca worked at the Mazgaon Docks joined the Indian Army and though completely blind dies social service at Bandra Bazar Road after his retirement.

His wife Hafiza Bi sells ladies garments on a hand cart near the Agha Khani Jamatkhana at Bandra Bazar Road .

Both have a daughter who lives at Manhattan New York, a grandson in UK.. but they wont retire either.

Hafiza Bi educated all her kids through the money she earned selling her wares on the hand cart , she is not willing to forget those days even now.