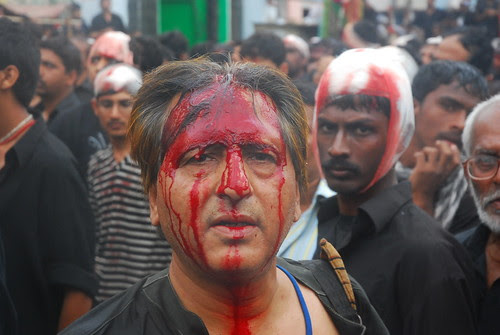 I start a new intense series at Flickr , Moharam in Hyderabad 2009.

I have cut my head in most of the cities of India , but Hyderabad is a city I will never forget , as a Shia and as a photographer blogging pain.

I arrived barefeet in Hyderabad on 8 Moharam .. I stayed for a single day at Hotel Charminar , at Dewan Deodhi close to the Bargah of Hazrat Abbas.

I left the hotel the same day a friend Naqi bhai put me up in his house as it is close to the other Dargah of Hazrat Abbas called Choti Bargah..where I have a lot of dear friends well wishers , specially the kids who were there taking care of my simple needs tea and water..

I must mention no cooking takes place in a Shia Darga or at a persons house for 10 days food comes as Niyaz and there is far too much of it it is spread around.


I met my dear patron Nawab Shariyar Saab and his family at Shariyar Palace and tasted the Hazri here ..this on 8 Moharam morning too..

I shot 8 Moharam at Hussaini Kothi in memory of the soul of dear departed Nawab Rashid Ali Khan Saab the patriarch who passed away.

Hussaini Kothi is another memorable experience of old time Shia Nawabi charm Adab and Tehzeeb..and these are all blue blooded Nawabs, but they bend and salute each person that comes to their majlis ..I shot their kids ding this Adab a part of their Nawabi Tehzeeb and salutation..found also among the Nawabs of Lucknow and Mehmoodabad

I had to abort the Hussaini Kothi shoot my battery and charger failed ..I had to go buy a new battery at the Kothi market the same day.. but I had shot quite a bit of footage.

I had also carried my film camera F100 just in case..

On 8 Moharam night I shot both the Dargahs when the Alams are taken into the crowd and put to rest.

On 9 Moharam I shot a majlis of Iqbal bhai a unique house majlis capture..

On 9 Moharam late night I shot the procession at the Shia cemetery called Mir Mousavi Deira ..I had never shot this before ..when I had shot Moharam in Hyderabad 2003 both Ashura and Chelum.. I was back here after six years.

On Ashura I shot the entire proceedings from Baragh.. I cut my head but the blade was not effective..

I went to shoot the Bibi ka Alam when it had passed Charminar, this is the greatest moment of Shia pain, in every area the Alam arrives on elephant , the residents cut their heads like raw onions, scourge their backs and the quintessential Hyderabadi blade matam.

I took a dagger during this procession with my Nikon dangling round my neck leapt into the air and with several blows had cut my head , the picture I asked a bystander to shoot after my kama matam.

A little ahead I hit my head again with my hands to start the bleeding allover and did the Tandav on the Soul of Shimr on the streets of Hyderabad.

I aborted this procession , I had lost lot of blood could barely walk back to the Choti Bargah and at 8.30 pm again walked in the same condition to a Shia enclave for Shamey Ghariba ..this was in total darkness and flash was not allowed..

The tabaruk was the best here rice and curry and puddi.. made of dahi and chillies.

this trip I did not shoot the Imam Bargahs but connected with Sadik Bhai the Irani group head who with other Iranis feeds the poor and the devotees at Hussain Tekri Jaorah..this was at Darbare Hussain the Irani Shia strong hold in Hyderabad old city.


The only crazy incident that happened here was at the Choti Bargah, I was shooting some street urchins when a man out of the blues pulled my camera luckily it was around my neck before I could respond he had my neck in a vicious grip and continued strangling me , my other hand being useless and I was carrying a satchel that had the Nikon 80- 200 lens and my F 100 - I tried to bear it out rather than resist and damage my cameras ..he was biting my hand too, luckily my host and other Shia youth came to my help.. it turned out he was a mad man under drugs..the cops as usual arrived late and I refused to press charges..

This is the flip side of street photography and it can happen to the most street savvy person..

This is a set of 3500 pictures or more, the blood had seeped into my camera lens so see it as is where is ..

And God willingly I will shoot the Hyderabad Chehlum, with my American friend Dr Glenn Losack MD from New York Manhattan.


I have shot a family of tribal thieves, sorcerers Hindus who have converted with their entire community to Shiasm..

I shot a guy Rajesh from Latur a devout Hindu who comes to serve at the Choti Bargah ..he is a cobbler by profession , and takes care of the devotees shes and slippers , now hear this whatever he earns he buys food to the poor , and I am crying as I dont think anyone could be more poorer than him , yes this is Maharashtrian humility making me proud of my roots as a Mumbaikar in Hyderabad.

On Ashura he had cut his head too he wears only black clothes does matam on the streets at Civil Court , Chatta Bazar where the dargah is situated

I do not wish to bore you with text.. and I will avoid it ..only where it is necessary..