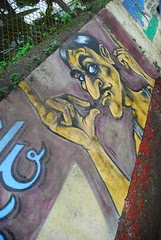 I have lived with the East Indians as a tenant at Veronica street , than I lived with them as neighbors at 21 De Monte Street and they are vanishing.. leaving behinds dreams that I shot as pictures of pain...
And the Church hastily put in Render To Caesar What Belongs To Caesar and to God What Belongs to God.. the Church turned its back on its own people as the Exodus began.. towards distant land leaving behind their forefathers in the St Peter Cemetery or the varios cemeteries on Church land.