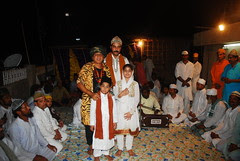 Sultan-ul-Hind, Hazrat Shaikh Khwaja Syed Muhammad Mu'īnuddīn Chishtī (Persian/Urdu: حضرت خواجہ سیّد محمد معین الدین چشتی اجمیری) was born in 1141 and died in 1230 CE. Also known as Gharīb Nawāz (غریب نواز), or 'Benefactor of the Poor', he is the most famous Sufi saint of the Chishtī Order of the Indian Subcontinent. He introduced and established the order in South Asia. The initial spiritual chain or silsila of the Chishti order in India, comprising Mu'īnuddīn Chishtī, Bakhtiyar Kaki, Baba Farid and Nizamuddin Auliya (each successive person being the disciple of the previous one), constitutes the great Sufi saints of Indian history.[1]

Khwaja Mu'īnuddīn Chishtī is said to have been born in 536 A.H./1141 CE, in Chishti in Sistan.[2] He was a Sayed, a descendant of Muhammad through Ja'far aṣ-Ṣādiq. He grew up in Persia. His parents died when he was only fifteen years old. He inherited a windmill and an orchard from his father. During his childhood, young Mu'īnuddīn was different from others and kept himself busy in prayers and meditation. Legend has it that once when he was watering his plants, a revered Sufi, Shaikh Ibrāhim Qundūzī (or Kunduzi) -- the name deriving from his birth place, Kunduz in Afghanistan -- came to his orchard. Young Mu'īnuddīn approached him and offered him some fruits. In return, Sheikh Ibrāhīm Qundūzī gave him a piece of bread and asked him to eat it. The Khwāja got enlightened and found himself in a strange world after eating the bread. After this he disposed of his property and other belongings and distributed the money to the poor. He renounced the world and left for Bukhara in search of knowledge and higher education.[3]

He became the Murid (disciple) of Usman Harooni.
[edit] Journeys

Mu'īnuddīn Chishtī visited the seminaries of Samarkand and Bukhara and acquired religious learning at the feet of eminent scholars of his age. He visited nearly all the great centers of Muslim culture, and acquainted himself with almost every important trend in Muslim religious life in the Middle Ages. He became a disciple of the Chishtī saint 'Uthmān Hārūnī. They travelled the Middle East extensively together, including visits to Mecca and Medina.
[edit] Journey to India

Mu'īnuddīn Chishtī turned towards India, reputedly after a dream in which Prophet Muhammad blessed him to do so. After a brief stay at Lahore, he reached Ajmer along with Mohammad of Ghori, and settled down there. In Ajmer, he attracted a substantial following, acquiring a great deal of respect amongst the residents of the city. Mu'īnuddīn Chishtī practiced the Sufi Sulh-e-Kul (peace to all) concept to promote understanding between Muslims and non-Muslims.
[edit] Establishing the Chishtī Order in India

The Chishtī order was founded by Abu Ishaq Shami (“the Syrian”) in Chisht, some 95 miles east of Herat in present-day western Afghanistan.[4] Moinuddin Chishti established the order in India, in the city of Ajmer in North India.

Moinuddin Chishti apparently never wrote down his teachings in the form of a book, nor did his immediate disciples, but the central principles that became characteristics of the Chishtī order in India are based on his teachings and practices. They lay stress on renunciation of material goods; strict regime of self-discipline and personal prayer; participation in Samā' as a legitimate means to spiritual transformation; reliance on either cultivation or unsolicited offerings as means of basic subsistence; independence from rulers and the state, including rejection of monetary and land grants; generosity to others, particularly, through sharing of food and wealth, and tolerance and respect for religious differences.

He, in other words, interpreted religion in terms of human service and exhorted his disciples "to develop river-like generosity, sun-like affection and earth-like hospitality." The highest form of devotion, according to him, was "to redress the misery of those in distress – to fulfill the needs of the helpless and to feed the hungry."

It was during the reign of Emperor Akbar (1556–1605) that Ajmer emerged as one of the most important centers of pilgrimage in India. The Mughal Emperor undertook an unceremonial journey on foot to accomplish his wish to reach Ajmer. The Akbarnāmah records that the Emperor's interest first sparked when he heard some minstrels singing songs about the virtues of the Walī (Friend of God) who lay asleep in Ajmer.

From Delhi, disciples branched out to establish dargāhs in several regions of South Asia, from Sindh in the west to Bengal in the east, and the Deccan in the south. But from all the network of Chishtī dargāhs the Ajmer dargāh took on the special distinction of being the 'mother' dargah of them all.
[edit] Dargah Sharif

he dargah (shrine) of Chisti, known as Dargah Sharif or Ajmer Sharif is an international wakf (endowment), managed under the 'Dargah Khwaja Saheb Act, 1955' of Government of India. The Dargah Committee, appointed by the Government, manages donations, takes care of the maintenance of the shrine, and runs charitable institutions like dispensaries, and guest houses for the devotees.[5] The dargah, which is visited by Muslim pilgrims as well as Hindus and Sikhs as a symbol of intercommunal harmony, became the target of a terrorist bomb attack[6] in October 2007 by suspected Hindutva militants.
[edit] In popular culture

A Bollywood movie Jodhaa Akbar (2008), directed by Ashutosh Gowariker, includes a qawwālī in praise of Moinuddin Chishti ("Khwāja Mērē Khwāja"). It depicts the Emperor Akbar being moved by the song to join the whirling-dervish-like dance that accompanies the song. The song is composed by A.R. Rahman.
[edit] Sufis of the Chishtī Order

Today, hundreds of thousands of people – Muslims, Hindus, Christians and others, from the Indian sub-continent, and from other parts of the world – assemble at his tomb on the occasion of his 'urs (death anniversary).

Start of the Chishtī Order:

[edit] Others Buried in the Maqbara enclosure

The famous Mughal generals Sheikh Mīr and Shāhnawāz Khān were buried in the enclosure of Mu'īnuddīn Chishtī's Maqbara after they died in the Battle of Deorai in 1659. Shāhnawāz Khān was the Emperor Aurangzeb's father-in-law.[7]