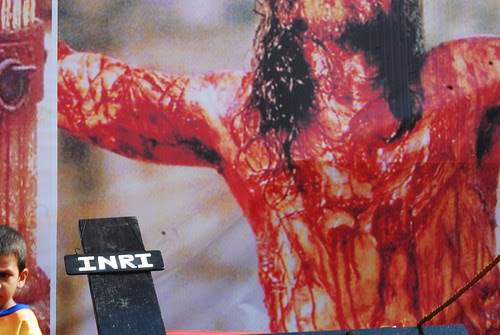 INRI is an acronym of the Latin inscription IESVS·NAZARENVS·REX·IVDÆORVM (Iesus Nazarenus, Rex Iudaeorum), which translates to English as "Jesus the Nazarene (Galilean), King of the Jews (Judeans)". The Greek equivalent of this phrase, Ἰησοῦς ὁ Ναζωραῖος ὁ βασιλεὺς τῶν Ἰουδαίων (Iesous ho Nazoraios ho Basileus ton Ioudaion), appears in the New Testament of the Christian Bible in the Gospel of John (19:19). Each of the other accounts of Jesus' death has a slightly different version for the inscription on Jesus' cross: Matthew (27:37), "This is Jesus, the King of the Jews"; Mark (15:26), "The King of the Jews"; and Luke (23:38), "This is the King of the Jews." John and Luke state it was written in Hebrew, Greek, and Latin, while Matthew and Mark describe it as the charge for crucifying Jesus. Luke states that it was a statement hung above Jesus's head. Since John's form is the most complete it is the one that is usually found on depictions of the Crucifixion of Jesus.

And Pilate wrote a title, and put it on the cross. And the writing was JESUS OF NAZARETH THE KING OF THE JEWS. This title then read many of the Jews: for the place where Jesus was crucified was nigh to the city: and it was written in Hebrew, and Greek, and Latin. (King James Version)

According to all four Gospels, Pilate challenged Jesus to deny that he was the "King of the Jews" and Jesus did not deny the accusation.[1]