A Message of Meter Jam At Bandra 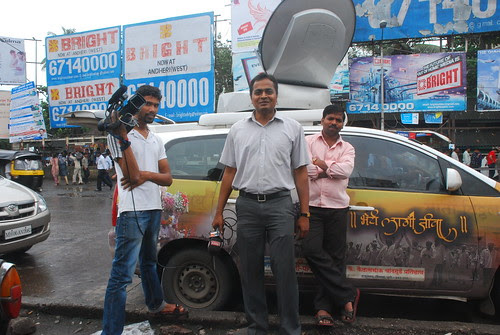 A Message of Meter Jam At Bandra, originally uploaded by firoze shakir photographerno1.

Today 12 August 2010 was the call given to wake up the soul of a somnolent city called Mumbai again the rude behavior of the cabbies rickshah guys who refuse passengers and dont ply short distances.the continuous demand for fare hike and the dadgairi of their bosses to bring the city to a halt for any flimsy excuse.

The idea their brain child deserves praise and accolades , this is the task of those who run the city who have done nothing but appease the cabbies the ricksha guys and the union leaders for political survival and nothing else.

The public well they can be damned.


On the Internet there was great support as well in the media , and I support them too I wrote a blog on Flickr and Facebook and cross blogged it at Word Press and Blogspot.

I went this morning to shoot the influence of Meter Jam or its out come at grass root level at Bandra Station..and life went on as usual, the general public knew nothing about it even the kids that surf the net were clueless.
These media guys from IBN Lokmat with reporter Vinod Talekar too had come here to read the public's reaction , they took my byte and were quite surprised when I shot them...bloggers to can be newsworthy from time to time.

Vinod gave me Jayesh Rupanis mobile number , Jayesh is one of the whiz kids of this campaign , but he was at work, and told me they were relying on self help, no activists or volunteers..
I felt even a single student with a banner would have salvaged this protest of peace at Bandra at least..
I did not cover other areas so I speak for Bandra only.

However I hung around shot a few frames of people getting into rickshahas and cabs just to show you truth and not to in any way demoralize or belittle their efforts without ulterior motive.

I through this blog salute the young spirit of Mumbai , they tried and they deserve a pat and all praise.


I left the public and instead shot over 50 frames of the Dabbawalas of Bandra Station ,a subject very close to my heart.

But I have one regret and I told their Mukadam Ganpat Bhai Mare , with all their Sigma 6 status , their meeting with Prince Charles and publicity and what not has anything really been done to upgrade their lives or their children s lives.

They are there slogging their ass off and bloggers like me shooting their pictures to internationalize their humility and their pain and hardships.

And it was drizzling but they went about their work, the Dabbawala is the true soul of the resilience the resurgence of a a Marathi Manoos ..he is the eternal spirit of the survival of our city..and Jai Mumbaikar Jai Maharashtra.