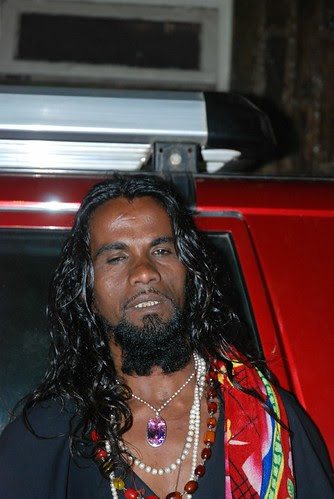 The first time we met many years back at the same location, he was pretty upset because I took his picture,he gave me a verbal volley of abuses, later Handi Sai the head of the Chancawalli Rafaees and also his head told him to apologize to me, and in that instant we became mutual friends till date..

He is an expert swordsman uses two swords to pierce his eyeballs he is very stylish too..women cant take their eyes of him, many have approached him directly with an offer of having his child , they will pay any amount to bed him..

He is a great storyteller too..does not mix with the other rafaees stays to himself..

He hails from a Holy Shrine in the jungles close to Ajmer Sharif,..he is a sight to see leaping in the air in his long robes cutting his tongue with the sword..

I could have cropped this pictures to make it more appealing , but Hassan Ganda is a foot note you cant miss even if you read the entire epistle.