A Temple of Hope and a Dead poet 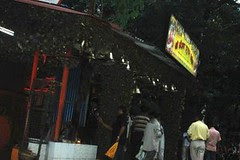 A Temple of Hope and a Dead poet
Originally uploaded by flickr photographerno1
I was coming from Juhu and shot a set of pictures on flash,but it got badly messed , this one picture was the saving grace, but I went again this morning and shot a few more, as this temple excites me, the numerous bells, each has a story of an accomplished wish, and here I could feel the stirrings of a story, a wretched poet, comes to a temple and , while his head is in devotion to Lord Hanuman, and he is fervently praying , for his poems to be published , he has the entire lot in his satchel, in his utter haste and confusion , he forgets the satchel at the temple.

He rushes home and , realises his folly , he immediately takes the train back to the temple, as was his bad luck , while crossing the railway tracks ,his foot slips and he is crushed to death, no next of kin, an accidental death, a mere number... soon forgotten like all other deaths that takes place on railway tracks.

In the meantime the satchel is found by the daughter of the priest, she is mesmerized by the deathly thoughts that form the nerve centre of the poems.

She dare not tell her father, for within the dark thoughts is a lingering light of Hope, a hope that had many a times decieved our dead poet, the stark reality of the satchel , there was no hint of an address, only sheaves of crumpled paper, every part of the paper had been utilised to the maximum, the satchel had a train ticket to Mira Road return, a little crumpled paper bag of uneaten peanuts.

The priest s daughter kept the satchel of poems for quite some time hoping the poet would return ,time passed one day a few days before she was to get married, she went to the Gateway of India and placing a few heavy rocks in the satchel, she placed it into the waters... never looked back once..

Life is prose that reverberates the rythm and pain of an orphaned poetry , words flowing away ... from the shores of Gateway of India to another distant world to lash the walls that surround the nothingmess of her soul.

I went and placed a little bell for the accomplishment of this story at Ghanteshwar Temple and for the soul of the dead poet.
By firoze shakir - August 24, 2007