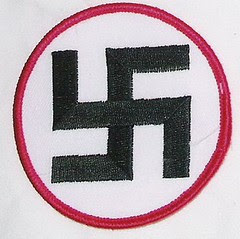 --------------------------------
Is that moron or mormon you must get yourself some anger management pills
you are losing it not good poetry rub yourself with some deep heat but be careful getting it on your fingers, we know what you do when the lights go out in the infirmary


group of Germans at the festival provoked initially a scuffle with the Indians by chanting anti-foreigner slogans.
The mob then proceeded to chase the Indians who sought refuge at a pizzeria after a street chase.
The doors of the restaurant were smashed by the assailants as a large crowd of by-standers merely stood by and watched the incident.
At least two police officers were hurt as some 70 policemen drove back the attackers from the entrance of the pizzeria.
Two people were briefly detained in the criminal case, but later released.
According to the weekly Der Spiegel news magazine, the xenophobic attack was apparently pre-planned by a group of people, widely known in town for their neo-Nazi ideology.
Earlier this month, two foreigners were hurt in two separate neo-Nazi attacks in the eastern German state of Saxony- Anhalt which had the highest figure of per capita neo-Nazi assaults in Germany last year.
All in all, the number of crimes committed by neo-Nazis has reached a new peak in Germany in 2006 as officials openly admit that their efforts to combat far-right crime have failed.
Some 18,142 neo-Nazi crimes were registered in Germany last year, up from 15,900 in 2005.
The number of anti-foreigner attacks stood at 511 in 2006, indicating a 37 percent rise from the previous year.
The latest figures were a "cause for concern", German Interior Minister Wolfgang Schaeuble was quoted as saying earlier this year.
"Unfortunately, our multi-faceted efforts have not led to a lowering this kind of crime," he added,
Political observers link the dramatic increase in the number of far-right delicts to the recent success of neo-Nazi parties in key regional elections in several east German states.
Young neo-Nazis feel more and more emboldened to commit hate crimes, knowing that police won't really charge them with an offense.
Most of the suspects implicated in neo-Nazi crimes are under 21 years old.
Neo-Nazi attacks are mainly concentrated in economically depressed eastern Germany, which has yet to recover from the whiplash transition from Communism to capitalism.
Some 17 years after the German reunification, prospects are still bleak for those living in the five eastern states.
www2.irna.ir/en/news/view/menu-239/0708227024175544.htm
By firoze shakir - August 24, 2007