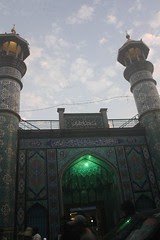 Moghul Masjid God Lives Here
Originally uploaded by flickr photographerno1
This is where God lives, I have written so much about God and his favorite haunt the Moghul Masjid built by Mohomed Hassan Shirazi an Iranian philanthropist and his Lucknowi wife from the family of the royal Nawabs.

I cant stop shooting pictures of the Mogul Masjid, with all the money in the world the Khojas can built any grandeur like Mosque , but can never recreate the ambience of Moghul Masjid , where I feel the human presence of God. Other Mosques may have a heavenly God but the vision I see here is of a kind , human loving God, every little speck at Mogul Masjid praises the bounty of this God.

I don’t enter any other Mosque, yes I am a heretic, architectural Mosques that encage Godliness never inspired me, and I come here every Friday if I drop in at the Chor Bazzar flea market, I make it a point to have a black Kava at Khushali the Iranian samovar shop, and let my spirit roam at the Mogul Masjid..I am not much of a prayer man, but yes I pray all night, to be lulled to death on my pillow.
.I don’t want to die in any other place but my home if already destined within the borders of my beloved country.

I know people among my Malang friends who always carry a shroud bought from someone who came down with it from Mecca or Medina.

The Shias are living Shrouds in Iraq and in a friendly Muslim country called Pakistan, friendly is the punishment for living a Muslim and dying as Sunni or Shia in sectarian violence.

I never understood why the hard hearted called the non Muslims Kaffir, being human is worse than a Kaffir than I am a kaffir all right , there was a time in protest I wanted to change my name to Kafir Firoze Shakir.., my mother pleaded , I gave in.. remained a man loving Kaffir from within.

I lived for a short while in Muscat Oman and saw the tragedy and travesty of being an Indian Muslim.. you are considered of the lowest rung, I fled the Gulf., I for any X amount of money in the World would not want to live in the Gulf.

And I think it is countries like ours that kept the Covenant of Allah Alive.. and here I don’t talk of those who kept the covenant of the Devil and his Satanic Verses alive by killing , humans and innocence and blaspheming the name of Allah with their dastardly acts...

Yes I am opinionated, I am not a scholar of the Holy Koran, but its spirituality remains the same for the literate and the illiterate alike.
I saw a film called the Horseman, where Omar Sharif tears a part of the Holy Scripture to apply to a wound., it stayed with me all my life, I wore Ayats in a Tawiz or talisman round my neck , but gave it up, as I sinned too much was not worthy of desecrating it with my thoughts either.

Well I digress , Moghul Masjid , is the Mosque, I am in love with, there may be may more splendoured , but this imposing Mosque in a crowded area of Bhendi Bazar.. is my address of a human loving God.
By firoze shakir - August 31, 2007