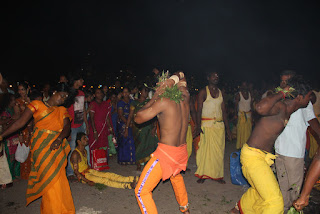 My genre since the time I began people culture ritual photography has been Possession , Occult , Hazri Dua Tawiz and Exorcism..
I shot and documented this during the Sufi Urus , in Mumbai Haji Malang Ajmer , Mira Dattar and many other Shrines .
I shot possession mostly during Durga Visarjan at Juhu when the goddess enters the body and it was incredible ,,But the maximum Hazri I shot at Hussain Tekri Jaorah ..a place where I have not gone since many years ..
Here at Worli the men women even children were in a trance .. bodies moving by themselves , bodies in a state of continuous motion..and I have shot of the wildest ones where a Hijra priest at Mahim Marriammen Feast , starts speaking in the voice of the goddess , and starts conversing .. this was out of the world ,, the hijra Krishna is a hardcore devotee of Lord Iravan and The Koothandavar Temple at Koovagam.
I have not met him for sometime now ,, and the Hijra Ashok who would have his cheeks pierced at Sion Koliwada Marriammen feast with the huge gathering of Hijras in tow ..
So now you know why I would rather shoot all this Magic Of India than the Mumbai Marathon , Vintage cars , and Kala Ghoda Festival.. nothing touches my soul as these ritualistic feasts do I have promised my Tamil friends that once in my lifetime will pierce my cheeks with a 18 feet road to show my solidarity as a Muslim with their Faith and their culture .
And I hope to shoot the Marriammn Feast in Salem Tamilnadu too.
By Firoze Shakir Photographer No1 - May 28, 2015