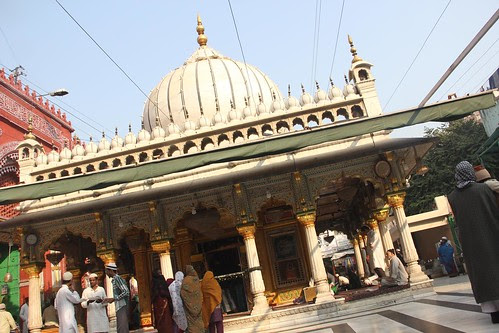 The Dargah Nizamuddin Aulia Delhi, a photo by firoze shakir photographerno1 on Flickr.

Nizamuddin Dargah (Urdu: نظام الدّین درگاہ ‎, Hindi: निज़ामुद्दीन दरगाह) is the dargah (mausoleum) of one of the world's most famous Sufi saints, Nizamuddin Auliya (1238 - 1325 CE). Situated in the Nizamuddin West area of Delhi, the dargah is visited by thousands of Muslims every week, and sees a fair share of Hindus, Christians and people from other religions. The tombs of poet Amir Khusro and Mughal princess Jehan Ara Begum are also located within the Nizamuddin Dargah complex, and Inayat Khan's tomb is just around the corner.[1]

The neighborhood surrounding the dargah is named after the saint, and is divided into two parts along Mathura Road: Nizamuddin West where the Dargah complex and a lively market dominated by Muslim vendors is located, and Nizamuddin East, an upper-class residential area situated between Humayun's Tomb and the Nizamuddin Railway Station.
The other important monuments in the Nizamuddin heritage area include Humayun's Tomb, Chausath Khamba, Mirza Ghalib's tomb, Barakhamba, Sabz Burj (Blue Gumbad) at the Nizamuddin Circle and Lal Mahal.