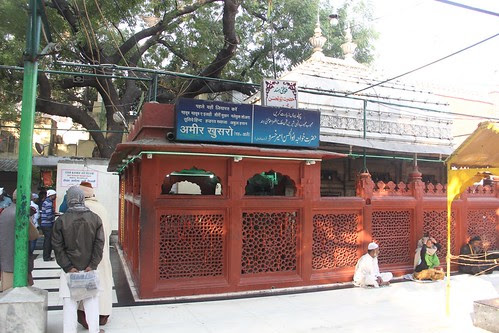 The Holy Shrine of Poet Amir Khusro, a photo by firoze shakir photographerno1 on Flickr.

Ab'ul Hasan Yamīn ud-Dīn Khusrow (1253–1325 CE) Hindi अमीर खुसरो, (Urdu: ابوالحسن یمین‌الدین خسرو‎;, better known as Amīr Khusrow (also Khusrau, Khusro) Dehlawī (meaning Amir Khusrow of Delhi) (امیر خسرو دہلوی) was a Sufi musician, great poet and scholar. A polymath an iconic figure in the cultural history of the Indian subcontinent. A mystic and a spiritual disciple of Nizamuddin Auliya of Delhi. Amīr Khusrow was not only a notable poet but also a prolific and seminal musician in the time of the Delhi Sultanate, being reputed to have invented both the Sitar and the Tabla. He wrote poetry primarily in Persian, but also in Hindavi. A vocabulary in verse, the Ḳhāliq Bārī, containing Arabic, Persian, and Hindavi terms is often attributed to him.[2]
He is regarded as the "father of Qawwali" (the devotional music of the Sufis in the Indian subcontinent).Introduced the Ghazal style of song into India. These traditions have been kept very much alive in India and Pakistan to this day.[3][4] He is also credited with enriching Indian classical music by introducing Persian, Arabic and Turkish elements into it and was the originator of the khayal and tarana styles of music.
A musician and a scholar, Amir Khusrow was as prolific in tender lyrics as in highly involved prose and could easily emulate all styles of Persian poetry which had developed in medieval Persia, from Khāqānī's forceful qasidas to Nizami's khamsa. He used only 11 metrical schemes with 35 distinct divisions. The verse forms he has written in include Ghazal, Masnavi, Qata, Rubai, Do-Beti and Tarkibhand. His contribution to the development of the g͟hazal, hitherto little used in India, is particularly significant.[5]


An illustrated manuscript of one of Amir Khusrau's poems.
Khusrow was a prolific classical poet associated with the royal courts of more than seven rulers of the Delhi Sultanate.[11] He is still loved and respected today in India, Pakistan and by lovers of Poetry and Sufi music throughout the world. With so many playful riddles, songs and legends attributed to him. Through his enormous literary output and the legendary folk personality, Khusrow represents one of the first (recorded) Indian personages with a true multi-cultural or pluralistic identity.To unite mankind through the power of Poetry, Music and Dance.
Urdu language and its development[edit]
Amir Khusrow was the author of a Khamsa which emulated that of the earlier poet of Persian epics Nizami Ganjavi. His work was considered to be one of the great classics of Persian poetry during the Timurid period in Transoxiana.
He wrote primarily in Persian and Hindustani. He also wrote a war ballad in Punjabi.[12] In addition, he spoke Arabic and Sanskrit.[7][13][14][15][16][17][18] His poetry is still sung today at Sufi shrines throughout Pakistan and India.
Amir Khusrow and the origins of the Sitar and the Tabla[edit]

Amir Khusro's genius as a musician speak volumes, for he is responsible for the invention of the tabla. The term tabla is derived from an Arabic word, tabl, which simply means "drum.",. Together with the invention of the sitar, the grand lute. Named after a Persian instrument called the setar (meaning "three strings"). The instrument appears to have descended from long-necked lutes taken to India from Central Asia. The first prototype instruments were invented during the Delhi Sultanate period of the 13th/14th centuries when the Persian patrons of music and poetry encouraged innovation in Indian art. The sitar flourished in the 16th and 17th centuries and arrived at its present form in the 18th century. Today it is the dominant instrument in Hindustani music. Both these instruments are the foundation of India's classical musical heritage.[19][20][21]
The development of the Tabla originated from the need to have a drum that could be played from the top in the sitting position to enable more complex rhythm structure's that were required for the new Indian Sufi vocal style of singing/chanting and Zikr. At the same time to complement the complex early Sitar melodies that Khusro was composing. The Tabla uses a "complex finger tip and hand percussive" technique played from the top, unlike the Pakhawaj and mridangam which mainly use the full palm and are sideways in motion and are more limited in terms of sound complexity.
Samples of Khusrow's poetry[edit]