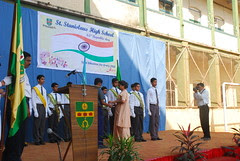 The school was founded in 1863 by the German missionary fathers of the Society of Jesus (Jesuits), making it one of the oldest schools in the city. Its alumni include Olympians such as Leo Pinto and Francis Demello; former Indian hockey captain Viren Rasquinha and Bollywood actors Salman, Arbaaz and Sohail Khan.

"It was wonderful to see our ex-students feeling nostalgic about their school days. I hope I can meet their expectations and transform our school into one that provides first class education," said Fr Jude Fernandes, principal.

The inaugural event took place on the feast of St Ignatius of Loyola. The event saw Indian musician Shaan, an alumnus, singing the school anthem, which had a special verse for the 150 year celebration, along with the choir and some ex-students. ‘Natus Ad Maiora: 150 years and beyond’, a 10-minute film on the school’s legacy and achievements was also screened

The guest of honour, Sunil Kaushal, chief executive of Standard Chartered Bank's India and South Asia operations and ex-student, released commemorative coins. To continue the celebration through the year, the school has planned a series of other events as well.

The school is also hoping to introduce the International Certificate of Secondary Education (IGCSE) system which will run parallel to the SSC curriculum. The proposal has been sent to the Jesuit board for approval, after which they will approach the Cambridge board