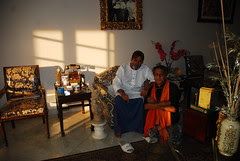 A Phenomenon Called Rajesh Khanna, a photo by firoze shakir photographerno1 on Flickr.

meaning of phenomenon
..A phenomenon (from Greek φαινόμενoν), plural phenomena, is any observable occurrence.[1] Phenomena are often, but not always, understood as 'appearances' or 'experiences'. These are themselves sometimes understood as involving qualia.

The term came into its modern philosophical usage through Immanuel Kant, who contrasted it with noumenon (for which he used the term Ding an sich, or "thing-in-itself"), which, in contrast to phenomena, are not directly accessible to observation. Kant was heavily influenced by Leibniz in this part of his philosophy, in which phenomenon and noumenon serve as interrelated technical terms.


phe·nom·e·non
[fi-nom-uh-non, -nuhn] Show IPA
noun, plural -na  [-nuh] Show IPA or, especially for 3, -nons.
1.
a fact, occurrence, or circumstance observed or observable: to study the phenomena of nature.
2.
something that is impressive or extraordinary.
3.
a remarkable or exceptional person; prodigy; wonder.
4.
Philosophy .
a.
an appearance or immediate object of awareness in experience.
b.
Kantianism . a thing as it appears to and is constructed by the mind, as distinguished from a noumenon, or thing-in-itself.
Origin:
1595–1605; < Late Latin phaenomenon < Greek phainómenon appearance, noun use of neuter of phainómenos, present participle of phaínesthai to appear, passive of phaínein to show

Can be confused:  phenomena, phenomenal, phenomenon (see usage note at the current entry ).