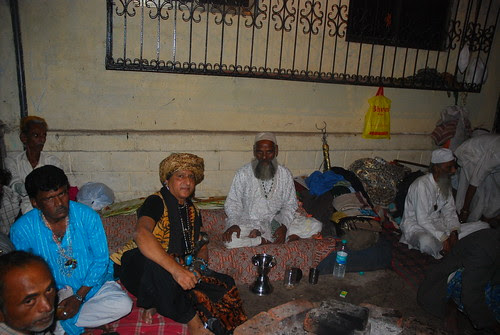 After I complete my backlog of Moharam pictures this will be next set at Flickr.com.

I have been shooting the Urus of Makdhoom Shah Baba Mahim for several years now my collection on Sufism at Flickr.

I do not adhere to Sufi beliefs but I do have a Sufiyana mijaz or temperament , my genre on Sufism is my documentary on the Rafaees body piercing mendicants followers of Imam Ali and Ghaus Pak, the Dhuni or the Holy Fire symbolizes Ahle Bayt and Imam Ali and the body piercings without bleeding are dedicated to the Mysticism of Ghaus Pak.

The other two subjects I shoot are Possession , or Hazri , exorcism and beggars in Sufiland.
Hijras of course are a subject in itself but connected to two dargahs Ajmer Sharif and Haji Malang.
I document the spiritual life of the Hijra bawas.

I also shoot the life of the Afro Indian tribe the Siddis who are performers of the Sufi circuit.

But at Mahim predominantly I shoot the Chancawalli Rafaees who are n charge of the Dhuni at the back of the Mahim dargah.

My good friend Pir Handi the Murshad died recently at Kota he was my patron, , his seat was taken over by Barsati Baba and Amanat Baba , for sometime , this year a new Murshad is in place , Sarkari Bawa from Hyderabad.

I met him for the first time when I visited the dargah with my friend Sakib the florist from Mahim. on 31 Dec 2010..

I missed Sakibs sandal and the Mahim Police sandal I shoot every year, things have changed drastically at the Dhuni and since it was the last day of the Mahim Urus I left Sakib and the rafaees shot the Kashmiri Muslim beggars , than I walked all the way to the Holy Shrine of Fakhruddin Shah Baba also known as Chote Sarkar, here I shot a few Sandals and some piercing stuff.


After the Urus of Makdhoom Shah Baba ends the Urus of Baba Fakhr begins it lasts for 3 days and the Chancawalli Rafaees move here at this Dhuni.

I have shot Baba Fakhrs Urus too for many years now.I dont know spiritually I feel more at home at this Dargah perhaps because it is not too crowded and I have some great experience here in the past.

Munna Bhai of Sangam Decorators is my very good friend so I am home at this Dargah during the Urus.

I shall post pictures in this set after I complete the Makdhoom Shah Baba set...