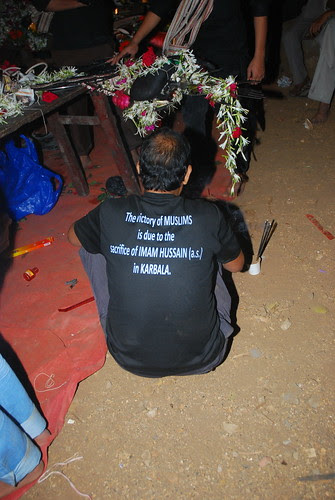 Whatever the general Muslim thinks , or whatever the doctrine of his beliefs , one fact remains by standing up against Yazid , Hussain changed the course of Islamic history.

I am not am Islamic scholar or a historian, nor do I proselytize my faith as a Blogger, as a matter of fact the pictures and my documentary of Shiasm is purely a story board I began in 2005 at Buzznet for my foreigner friends , as they knew nothing about this integral and important sect.

My Buzznet site was hacked I went through great pain , and I came out, with a greater vigor and continue showcasing Shiasm as a message of Tolerance and Mutual co existence..
Many years back I was doing zanjir matam and a Hindu friend could not bear my pain , he removed his shirt grabbed my zanjir and without a single word began scourging his back, he is a follower of Lalbagh Chya Raja a devout Siddi Vinayak believer.

I was not shocked but I took a solemn pledge for that one act for my Imam I promised him I would shoot his Faith for his parents and the Hindu community as long as I lived call it Hope and Hindutva a Message of Universal Peace and Humanity , I am crying as I write this, this is Hope and this is Humanity , I could live without Hope but not without Humanity, every year I follow his deity barefeet from Lalbagh till the Visarjan, yes I am proud to be a Hindu Shia.. in the city of my Karma and my Dharma Mumbai.

I have no animosity with any person of any faith, and my best friend is an American Jew , Dr Glenn Losack MD from Manhattan New York, seeing my Moharam pictures on the net , he came down to Mumbai befriended me and shot the Kurla juloos of Papu Bhai , he shot the Mumbai Chehlum barefeet , dressed in black, clothes I made for hm , and I still remember the moment when he grabbed my dagger to cut his head , I told him his time had not come and we became family.

He is my grand daughter 3 year old Mariyas god father and Guru.

So what you are even as a Shia depends on your surroundings and your parentage too, I cant be like you and you cant be like me.. I cant lead your life or you lead mine but yes Hussain is Hope that binds us all fro one generation to the next.