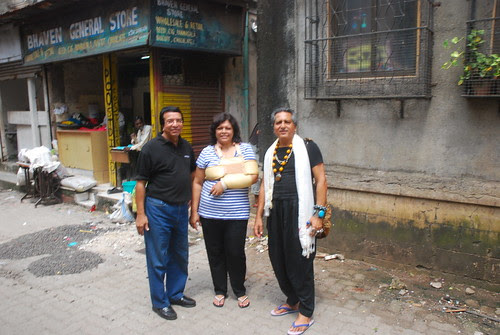 Clarence Gomes works for NAB and is a savior to blind people and is my Savior too.

He is a Roman Catholic I am a Shia Muslim.

We became friends because of St Peter our patron Saint .

This is about 11 years back he trusted me and gave me a Press Card for his paper that he will bring back after a long gap.

The Bandra Samchar Press Card is not as influential like the HTA or DNA now you wonder why I dont really talk of Times Of India Press Card .. it is a piece of Shit as even their peon shoots better pictures on his mobile phone and he was there shooting Lalbagh Chya Raja Visrajan with a greater passion than their highly over rated photo journos.

Who eke out shit pictures day in and day out for a living, reflections in trumpets and I dont want to go into details or I will be puking all over my shirt front.

Shooting for fuck sake is not photojournalism you need divine passion poetry and pathos to shoot life and touch the chords of humanity..Our first learning book of photography was the newspaper .now it is blogs bloggers shoot pictures a million times better than these high calibrated photo journalists of Mumbai who arrange pictures mercilessly killing the meaning of street photography.

I dont talk of all photo journalists but a large number of them their attitude , their egos more boated than fish fucked in an oil spill.

And so Bandra Samachar a non profitable an inconspicuous Press Card took me to places I visited in India , be it Moharam photography or exorcism at Hussain Tekri or the Hijras in Ajmer. or the Athvi of Sulaiman Bhai erstwhile Raja of Mehmoodabad. Kumbh Battis Shirala snake festival bullock cart races and all in all 147,038 blogs / 1,125,158 views at Flickr tells my story and the story of a Bandra Samachar Press Card.

I cannot enter the Press Club of India with a Bandra Samachar Press Card but does it matter.

I respect senior photo journalists touch their feet give them respect and emulate them be it Mr Mukesh Parpiani Mr Loke Senior of Navkal earlier PTI.

And my favorite nowadays is this diminutive bundle of creativity Pratik Koli.

So seeing the crass in photo journalism makes me shudder in pain so I am lucky I switched from Times of India to HTA and DNA .. I only read my neighbors Midday which is nothing but a country cousin clone of Mumbai Mirror..it saves money.

So I have trained my two and a half year old grand daughter Marziya Shakir who also wears a Bandra Samachaar Press card when she shoots the streets with me on her god father Dr Glenn Losacks Nikon D 80 that he gave her as her Hanukkah present when she was a year old.

And because I dont have to earn cookie points nor do I earn money through my blogs or pictures I post what I want when I want I dont have to go under an editors desk to lick him up for a single picture that will die away as soon as it is born.

So I kept my Lalbagh Visarjan pictures on hold I walked with Lalbagh Chya Raja a shradalu or a devotee shot when I got the opportunity and left the moment I had finished shooting the Muslims felicitating the Raja at Do Tanki.

I still have to post the backlog of my Dahi Handi pictures shot at Vartak Nagar Thane Juhu Gauri Visarjan and GSB Wadala Ganeshotsav Samiti pictures.

Flickr uploader is not the fastest thing in the world.

So believe me it is how you shoot what you shoot and a Press Card hardly makes a difference and if you want you could shoot the CWG Games without a press card ..and by chance if you resemble Mr Kalmadi as a photo journalist your chances of shooting the Games are over the moment the security catches up with you take my advice .