I Shoot The Incredible World Of Hijras Only For Myself 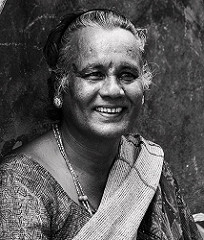 She was sitting with a young lad  in a tiny lane and having a very private chat I could not resist shooting her I shot two frames to my collection documentary on Hijras or transgender ,, 20000 and over images of a mystical community hidden completely from public view ,,every type of hijra I shot the mujra queens , the hijra whores , the bardancers , the beggars , the beggars on local and long distant trains , hijra performers at Muslim weddings, hijra shamans or bawas , hijra kids , hermaphrodites, crossdressers , and the androgyne ,

I still meet them as though they are forced on my camera consciousness , and because they know I respect their gender , I dont do it for a few minutes fame , or money or coffee table book ,,I thought their story was to be told sincerely without cliches and without pompous pandering of their sexuality.. its conflicting confusion and ambiguity , trapped women held viciously in mens bodies ,,but than what others wanted was not their story simply their pictures to misuse them cheat them of their identity and commit fraud cheat the gullible  the naive who they honey trapped with an evil agenda.

I decided let others tell their story shoot their pictures I shot it for my eyes only..I wrote poems eulogizing their fight against the draconian colonial anti human law Article 377 ..but my poetry went silent as my poetry is less words more picture .

This is resized picture of a hijra at Bandra Bazar road as I was going to meet a friend I met another hijra rushing to a country bar.. most of the poor ones love to drown their sorrow in hooch..and if  they die .. even by accident their death a is a tragic travesty of misplaced gender ,, no nor even God genderless to defend her ...