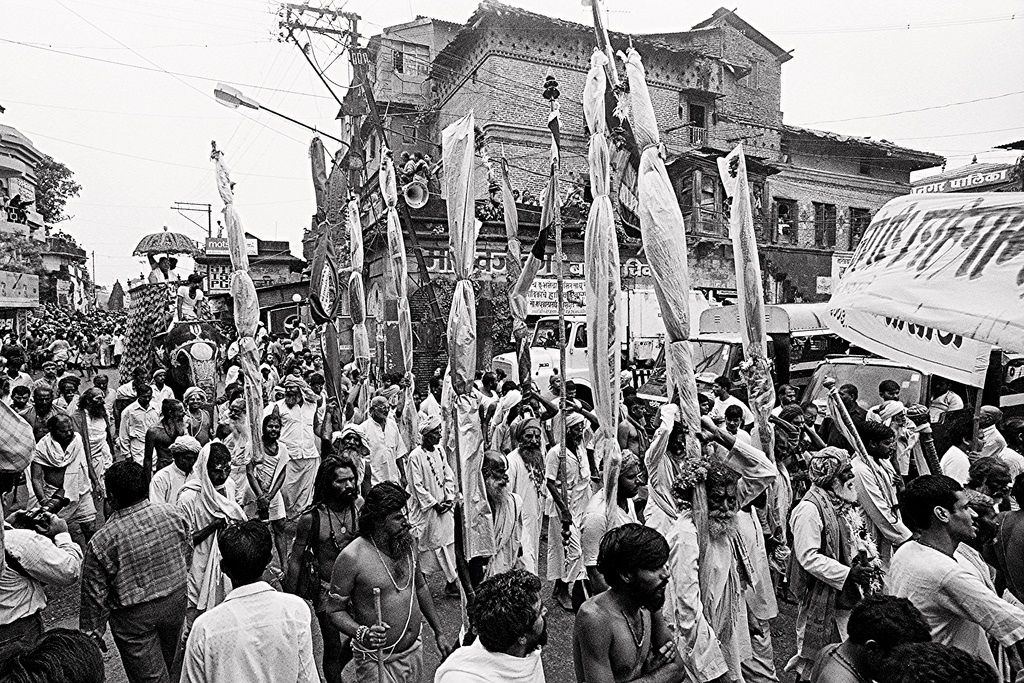 Kumbh Mela (/ˌkʊm ˈmeɪlə/ or /ˌkʊm məˈlɑː/) is a mass Hindu pilgrimage of faith in which Hindus gather to bathe in a sacred river. It is considered to be the largest peaceful gathering in the world where around 100 million people were expected to visit during the Maha Kumbh Mela in 2013 in Allahabad.[5][6] It is held every third year at one of the four places by rotation: Haridwar, Allahabad (Prayaga), Nashik and Ujjain. Thus the Kumbh Mela is held at each of these four places every twelfth year. Ardha ("Half") Kumbh Mela is held at only two places, Haridwar and Allahabad, every sixth year. The rivers at these four places are: the Ganges (Ganga) at Haridwar, the confluence (Sangam) of the Ganges and the Yamuna and the mythical Saraswati at Allahabad, the Godawari at Nashik, and the Shipra at Ujjain. The name Kumbh Mela comes from Hindi, and in the original Sanskrit and other Indian languages it is more often known as Kumbha Mela. Kumbha means a pitcher and Mela means fair in Sanskrit. The pilgrimage is held for about one and a half months at each of these four places where it is believed in Hinduism that drops of nectar fell from the kumbha carried by gods after the sea was churned. Bathing in these rivers is thought to cleanse one of all sins.[7]The festival is billed as the "world’s largest congregation of religious pilgrims".[8] There is no precise method of ascertaining the number of pilgrims, and the estimates of the number of pilgrims bathing on the most auspicious day may vary; approximately 80 million people attended on 14 February 2013.

Mauni Amavasya traditionally attracted the largest crowds at the mela, held here every 12 years. The current Kumbh Mela was held on 14 January 2013 at Allahabad. The day marked the second and the biggest Shahi Snanam (royal bath) of this event, with 13 akharas taking to the Sangam. 10 Feb 2013 was the biggest bathing day at the Maha Kumbh Mela and probably the largest human gathering on a single day. Over 30 million devotees and ascetics took holy dip on the occasion of Mauni Amavasya.[9]

History[edit]
The first written evidence of the Kumbh Mela can be found in the accounts of Chinese monk Xuanzang (玄奘, alternately Hsuan Tsang) who visited India in 629–645 CE, during the reign of King Harshavardhana.[10][11] However, similar observances date back many centuries, where the river festivals first started getting organised. According to medieval Hindu theology, its origin is found in one of the most popular medieval puranas, the Bhagavata Purana. The Samudra manthan episode (Churning of the ocean of milk), is mentioned in the Bhagavata Purana, Vishnu Purana, the Mahabharata, and the Ramayana.[12]

The account goes that the Devas had lost their strength by the curse of Durväsä Muni, and to regain it, they approached Lord Brahma and Lord Shiva. They directed all the demigods to Lord Vishnu[13] (full story on kumbh mela) and after praying to Lord Vishnu, he instructed them to churn the ocean of milk Ksheera Sagara (primordial ocean of milk) to receive amrita (the nectar of immortality). This required them to make a temporary agreement with their arch enemies, the Asuras, to work together with a promise of sharing the wealth equally thereafter.[14] However, when the Kumbha (urn) containing the amrita appeared, a fight ensued. For twelve days and twelve nights (equivalent to twelve human years) the Devas and Asuras fought in the sky for the pot of amrita. It is believed that during the battle, Lord Vishnu (incarnated as Mohini-Mürti) flew away with the Kumbha of elixir spilling drops of amrita at four places: Allahabad (Prayag), Haridwar, Ujjain and Nashik.[15]

Kumbh Mela takes place every twelve years at one of four places: Allahabad, Haridwar, Ujjain and Nashik. The Mela in its different forms alternates between Prayag, Nashik, Ujjain and Haridwar every third year.[16][17][18]


Nashik[edit]
There are 14 Akhadas, of which 11 belong to the Shaiva sect (of the 11 Shaiva Akhadasa, one—Bhudada Akhada—is defunct, while 10 are active) and 3 to the Vaishnava sect. The Shaiva Akhadas take a holy dip at Kushavart in Trimbakeshwar, about 30 km from Nashik.[24] The Vaishnav Akhadas perform rituals at Ramkund in Godavari and stay at Tapovan.[25] The Vaishnava Akhadas have Khalsas (religious groups headed by Mahantas attached with Akhadas) attached with them. Both Shaiva and Vaishnava Sadhus used to take the holy dip in Trimbakeshwar, until 1838, when a clash between them led to bloodshed and the Peshwa ruler requested Shaiva sadhus to perform rituals at Trimbakeshwar and Vaishnavs to move downstream to Ramakunda in Nasik.

The next Kumbh Mela will be held at Nashik on the bank of river Godavari in 2015 (15 August to 13 September). The Kumbh at Ujjain is also called "Simhastha" (as Guru will be in Singh Rashi).[27]
Ujjain Purna Kumbh Mela 2016


According to The Imperial Gazetteer of India, an outbreak of cholera occurred at the 1892 Mela at Haridwar leading to the rapid improvement of arrangements by the authorities and to the formation of Haridwar Improvement Society. In 1903 about 400,000 people are recorded as attending the fair.[29] During the 1954 Kumbh Mela stampede at Prayag, around 500 people were killed, and scores were injured. Ten million people gathered at Haridwar for the Kumbh on 14 April 1998.[10]

According to the Mela Administration's estimates, around 70 million people participated in the 45-day Ardha Kumbh Mela at Prayag in 2007.[32]

Naga sadhu procession 1998 Kumbh Mela
The major event of the festival is ritual bathing at the banks of the river in whichever town Kumbh Mela being held:Ganga in Haridwar, Godavari in Nasik, Kshipra in Ujjain and Sangam (confluence of Ganga, Yamuna and mythical Saraswati) in Allahabad (Prayag). Nasik has registered maximum visitors to 75 million. Other activities include religious discussions, devotional singing, mass feeding of holy men and women and the poor, and religious assemblies where doctrines are debated and standardised. Kumbh Mela is the most sacred of all the pilgrimages.[citation needed] Thousands of holy men and women attend, and the auspiciousness of the festival is in part attributable to this. The sadhus are seen clad in saffron sheets with Vibhuti ashes dabbed on their skin as per the requirements of ancient traditions. Some, called naga sanyasis, may not wear any clothes even in severe winter.[citation needed] The right to be naga, or naked, is considered a sign of separation from the material world.[7]

After visiting the Kumbh Mela of 1895, Mark Twain wrote:

“It is wonderful, the power of a faith like that, that can make multitudes upon multitudes of the old and weak and the young and frail enter without hesitation or complaint upon such incredible journeys and endure the resultant miseries without repining. It is done in love, or it is done in fear; I do not know which it is. No matter what the impulse is, the act born of it is beyond imagination, marvelous to our kind of people, the cold whites.[39]”
The order of entering the water is fixed, with the Juna, the Niranjani and Mahanirvani akharas preceding.[40]

Darshan[edit]
Darshan, or respectful visual exchange, is an important part of the Kumbh Mela. People make the pilgrimage to the Kumbh Mela specifically to see and experience both the religious and secular aspects of the event. Two major groups that participate in the Kumbh Mela include the Sadhus (Hindu holy men) and pilgrims. Through their continual yogic practices the Sadhus articulate the transitory aspect of life. Sadhus travel to the Kumbh Mela to make themselves available to much of the Hindu public. This allows members of the Hindu public to interact with the Sadhus and to take "darshan." They are able to "seek instruction or advice in their spiritual lives." Darshan focuses on the visual exchange, where there is interaction with a religious deity and the worshiper is able to visually "'drink' divine power." The Kumbh Mela is arranged in camps that give Hindu worshipers access to the Sadhus. The darshan is important to the experience of the Kumbh Mela and because of this worshipers must be careful so as to not displease religious deities. Seeing of the Sandus is carefully managed and worshipers often leave tokens at their feet.[7]

Most significant days during the Kumbh Mela[edit]
Bhishma Ekadasi Snan

On this day, Bhishma Pithamaha, the oldest, wisest, most powerful and most righteous person belonging to the Kuru dynasty (approx. over 5000 years ago), narrated the greatness of Lord Krishna through Sri Vishnu Sahasranama to Yudhishtira, the oldest brother of Pandavas.[41]

Recent Kumbh Melas[edit]
1894[edit]
According to Paramahansa Yogananda in his work the Autobiography of a Yogi, it was during the Kumbh Mela in January 1894 at Prayag that his Guru Sri Yukteswar met Mahavatar Babaji for the first time.[42]

2003[edit]
When the Kumbh Mela was held in Nashik, India, from 27 July to 7 September 2003, 39 pilgrims (28 women and 11 men) were trampled to death and 57 were injured. Devotees had gathered on the banks of the Godavari river for the maha snaanam or holy bath. Over 30,000 pilgrims were being held back by barricades in a narrow street leading to the Ramkund, a holy spot, so the sadhus could take the first ceremonial bath. Reportedly, a sadhu threw some silver coins into the crowd and the subsequent scramble led to the stampede.[43][44]

2004[edit]
Sinhastha Mela help in Ujjain, India in the year of 2004 on the banks of River Kshipra where pilgrims took numerous religious baths.

2010[edit]
Haridwar hosted the Purna Kumbh mela from Makar Sankranti (14 January 2010) to Shakh Purnima Snan (28 April 2010). Millions of Hindu pilgrims attended the mela. On 14 April 2010, alone approximately 10 million people bathed in the Ganges river.[46] According to officials by mid April about 40 million people had bathed since 14 January 2010.[47] Hundreds of foreigners joined Indian pilgrims in the festival which is thought to be the largest religious gathering in the world.[47][48] To accommodate the large number of pilgrims Indian Railways ran special trains.[49] At least 5 people died in a stampede after clashes between holy men and devotees.[50]

Indian Space Research Organisation took satellite pictures of the crowds with the hope of improving the conduct of the festival in the future.[51]

Here are the details of most auspicious days (bathing dates) in year 2013 during Maha Kumbh Festival (mela).[53]