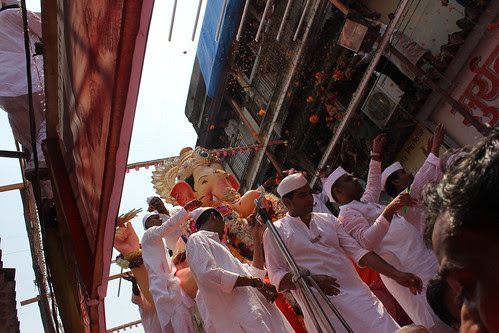 Most of the people come very early in the morning and park themselves outside the Lalbagh Chya Raja main street gate , this is a great picture when the Raja comes out .. and than the younger robust ones with hardy shoots walk behind him , and you need to be tough not lose your cool ..

I have shot the Raja once from the gate thanks to Vikram a volunteer and my Facebook friend..

I have shot the Raja following him from the main gate to Baharamata talkies from a house balcony and a terrace ..but I changed the rules of the game , as I was carrying a heavy bag two cameras an umbrella water bottle .. normally I carried a small satchel ..

I have shot the Raja in the rains too and mostly during Ramzan fasting and the Lalbagh volunteers helping me break my fast at a restaurant near Byculla . I have some great memories shooting the Raja and I remember a Hindu guy who told me while I was breaking my fast , because you walk with my God barefeet every year I promise to keep one fast in Ramzan .. and I had tears in my eyes ..I told him he need not fast.. I would fast for him too..I kept an extra fast before Ramzan for his kindness and his simplicity of spiritual thought.

This year after moving out of the pandal I came towards Ganesh Gully decided not to follow the Raja to Bharatmata ..I have swollen feet because of my visarjan treks for GSB Seva Mandal Ganesha and 7 Day Visarjan Juhu, so I walked to Chinchpokli had two vada pavs and stood on a tiny garden platform opposite the Chintamani poster and shot Tejukaya Ganesh Gully Rajas and finally Lalbagh Chya Raja on my Canon 7 D ..

Than followed the huge surging crowds and shot less , but shot where I could ..till Byculla and it is a very long slow paced journey, I met old friends photographers and shot pictures of Lalbagh Karyakartas Sunil Joshi Raju Langewal and others..

I shot the volunteers and than after I got caught in a huge crowd my wallet a folder of my memory cards stolen I was forced to abort shooting the Hindu Muslim Ekta committee of the Muslims of that are felicitating the Raja .. I headed to Nagpada Police Station informed them of my loss and in a very sad depressed state of Mind came home ..

What hit me most is not the loss of my belongings but that one memory card in a Vodafone USB box that was in the folder with the pandal Arti pictures before leaving for Visarjan and my pictures shot by Sagar a Facebook friend ..along with Lalbagh Chya Raja in the backgound ..

But I will shoot the Raja next year too more carefully ..Purcha Varshi Laokar Ya ...Jai Mangalmurti Ichapurti