She is the Most Enterprising Woman in the Market 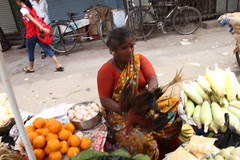 She is the Most Enterprising Woman in the Market, a photo by firoze shakir photographerno1 on Flickr.

She has a husband who is a dumb fool , he does what she tells him, assists her with her marketing skills whatever she sells she charges a fancy price but she makes her goods appear the best, the same is available at the next street stall but people buy from her.. she believes in what she sells..

She sells jambuls blueberries that are good for diabetes , maize fruits and now she is selling live desi chicken, actually the chicken coop belongs to a Muslim man but she has taken it from him , and is selling the same what he sold at nominal rates she sells at a premium..

And she is a Hindu, yest there is not distrust between the two as street sellers , I shoot her because she is a lesson in street marketing, she is a hardworking woman and through my pictures she will never ever see I pay tribute to her..

I dont just shoot beggars I shoot life I shoot the will to live with dignity on their own terms ..

And what you in the West call street photography shooting the surface scratching the surface with images , I shoot the same adding my mystical mind on the soul of my pictures I dont have to brag..I document ordinary life which people refuse to see so my pictures look different, I shoot differently..

I learn photography , read that as unlearn from a 4 year old child my grand daughter Marziya Shakir, he hold on a heavy camera Canon EOS 7 D but she shoots , she gets tired too after sometime so soon I have to buy her a light weight camera so she continues shooting the same stuff I shoot adding a new dimension to it without bias ..

Do children have bias.. prejudice , we create it in them we destroy the innocence of our children with our narrowness of mind and thought..

Its 5.22 am and I am catching up with my textless pictures adding my retsless angst as prose but read it as poetry because that is how visualize pictures ob the soul of my camera consciousness.

Thank you good folks on Google+