Pain is the Only Human Emotion We Truly Share With Everyone 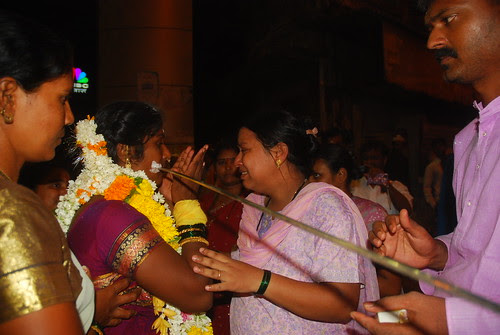 Pain is the Only Human Emotion We Truly Share With Everyone, originally uploaded by firoze shakir photographerno1.

I met Shilpa this afternoon as I passed the Marriamman Temple Macchimar Colony today on some work..I had gone to Canossaa Convent to a friends workshop and this was at about 1.00 pm I was to meet a client at my workplace between 3 pm and 3.30 pm so I had time to kill and besides today being Wednesday I thought of searching for my beggar friend Appu who has no hands or legs so I walked from here , I could not find Appu they said he had stopped coming to Mahim .

From Budh Bazar I cut across to Moro Road shooting street pictures and reached the Marriammen Temple..I met Laxmi her family and Shilpa too they were not aware that I had posted over 900 pictures at Flickr.com of their procession and event. these are simple people low profile and not publicity hungry at all.

Shilpa I talked at end as her marks on her cheeks of the rod had healed , she told me she undertook the rod piercing ritual to ask the Devi to end her fathers ordeal , he was suffering from incurable chronic disease and TB too was in great pain and could not eat food only drank water.. for several months.

She prayed for her fathers death as it would end his unbearable pain.. Shilpa told me the day she pierced her cheeks that is Sunday was the day her father breathed his last he died peacefully the same day.. they had him cremated the following day after she had completed her ritual and her rod removed.

She was crying near the Marriammen Temple when she narrated this story to me and before she undertook the ritual she had dreamed she was piercing her cheeks ..

And the night I shot her with her rod in the mouth was a night of pain for me too...I wish I could have shot the removal of her rod at the Temple but I aborted this event halfway at 10 pm and returned home to Bandra this is the second lot I am uploading today.. pictures that were in the womb of my camera.

And while I talked with them at the temple I had no desire to shoot their pictures .. not even a single frame as testimony of my visit.. but I shot a lot of pictures as I walked from here in the hot scorching humid heat till my workplace and reached there in time by 3 pm...

I was totally drenched dehydrated but I did meet Mr Vikas Mohan at the appointed time..at my workplace.