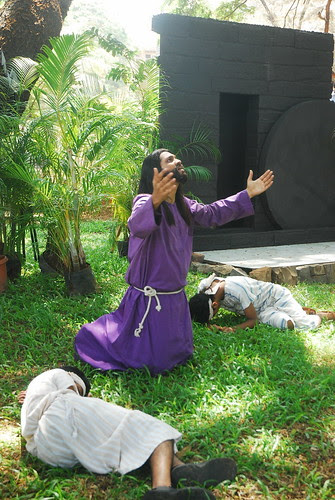 Gethsemane (Greek Γεθσημανἰ, Gethsēmani Hebrew:גת שמנים, Aramaic:גת שמני, Gath-Šmânê, Assyrian ܓܕܣܡܢ, Gat Šmānê, lit. "oil press") is a garden at the foot of the Mount of Olives in Jerusalem most famous as the place where, according to Biblical texts, Jesus and his disciples are said to have prayed the night before Jesus' crucifixion.

Gethsemane appears in the Greek of the Gospel of Matthew[1] and the Gospel of Mark[2] as Γεθσημανἱ (Gethsēmani). The name is derived from the Assyrian ܓܕܣܡܢ (Gaṯ-Šmānê), meaning "oil press".[3] Matthew (26:36) and Mark (14:32) call it χωρἰον (18:1), a place or estate. The Gospel of John says Jesus entered a garden (κῆπος) with his disciples.[4]
[edit] Location

According to the New Testament it was a place that Jesus and his disciples customarily visited, which allowed Judas to find him on the night of his arrest.[5]

There are four[6] locations claimed to be the place where Jesus prayed on the night he was betrayed.

1. The Church of All Nations overlooking a garden with a socalled "Rock of the Agony."
2. The location near the Tomb of the Virgin to the north.
3. The Greek Orthodox location to the east.
4. The Russian Orthodox orchard, next to the Church of Maria Magdalene by an orchard.

Dr. Thomson, author of The Land and the Book, wrote: "When I first came to Jerusalem, and for many years afterward, this plot of ground was open to all whenever they chose to come and meditate beneath its very old olivetrees. The Latins, however, have within the last few years succeeded in gaining sole possession, and have built a high wall around it. The Greeks have invented another site a little to the north of it. My own impression is that both are wrong. The position is too near the city, and so close to what must have always been the great thoroughfare eastward, that our Lord would scarcely have selected it for retirement on that dangerous and dismal night. I am inclined to place the garden in the secluded vale several hundred yards to the north-east of the present Gethsemane."[7]

According to Luke 22:43–44, Jesus' anguish in Gethsemane was so deep that "his sweat was as it were great drops of blood falling down to the ground." According to the Eastern Orthodox Church tradition, Gethsemane is the garden where the Virgin Mary was buried and was assumed into heaven after her dormition on Mount Zion. The Garden of Gethsemane became a focal site for early Christian pilgrims. It was visited in 333 by the anonymous "Pilgrim of Bordeaux", whose Itinerarium Burdigalense is the earliest description left by a Christian traveler in the Holy Land. In his Onomasticon, Eusebius of Caesarea notes the site of Gethsemane located "at the foot of the Mount of Olives", and he adds that "the faithful were accustomed to go there to pray". Ancient olive trees growing in the garden are said to be 900 years old.[8]