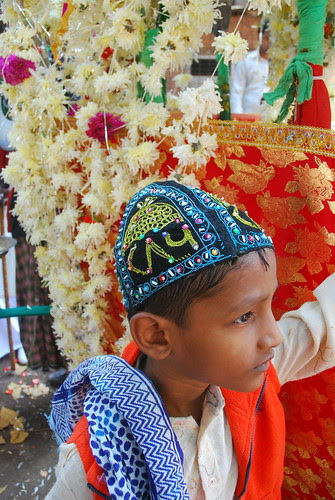 Sandal is the name given for sandal wood paste that will be placed on the Shrine of Makhdoom Shah Baba of Mahim..His Urus is a grand event for this Konkani Saint al Mahimi. along with a floral tribute called Chaddar.

I was lucky to shoot the preparation of the Sandal at Shakil Bawas Sandal last year..

As per tradition the first chaddar is placed by the Mahim cops, Makdoom Shah Baba being their patron Saint.

The cops predominantly Hindus are totally in spiritual awe of this sublime moment of placing the chaddar ar his Tomb.

This is the only time I shoot the spiritual soul of the Mumbai Police the finest secular police force of India.

I shoot this barefeet, and because of bad Mumbai roads I have punished my feet badly, I am a diabetic too..

The Rafaees are sword fencers and body piercers from the Qadri sect paying allegiance to Sheikh Abdul Qadir Jilani..

‘Abd al-Qadir al-Jilani ibn Salih ibn Jangidost, (Persian: عبد القادر گیلانی Abdolɢāder Gilāni) (also spelled Abdulqadir Gaylani, Abdelkader, Abdul Qadir, Abdul Khadir - Jilani, Jeelani, Jilali, Gailani, Gillani, Gilani,Al Gilani) (470–561 A.H.)(1077–1166 A.D.) was a Persian[1] Hanbali (Hambali) preacher, Sunni sheikh (Considered Sufi by "his followers"), and the figurehead of the Qadiri Sufi order. He was born on the first Ramadan in 470 A.H., 1078 A.D., in the Persian province of Gilan (Iran) south of the Caspian Sea. Since the Persian "G" does not exist in Arabic, his name has also been recorded as Kilani and Jilani in Arabic manuscripts.

Gilani belongs to the spiritual chain of Junayd Baghdadi. His contribution to thought in the Muslim world earned him the title Muhiyuddin (lit. "The reviver of the faith"), as he along with his students and associates laid the groundwork for the society which later produced stalwarts like Nur ad-Din and Saladin. His Sufi order named after him is generally thought to be the oldest and first of such orders.

The Mahim Rafaees are the oldest and both brothers dear friends of mine..

This procession of the Mahim Police Station takes a lot of time before it reaches the Holy Shrine.. I shot only the proceedings at the Police Station..

Earlier the Chancawalli Rafaees mendicants were called this time they were missing..

The surprise was Sharukh drummer a favorite of the hijras.

I did the kaif..I had handed my camera to Sher Khan photographerwho shot my pictures.

The highlight of this event was the Junagadh Siddi drummers and performers.. this will be a separate set on Flickr..