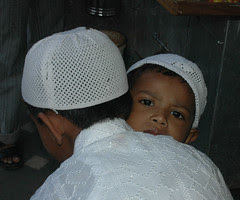 With this I end the Idd Namaz series, I have posted most of the photos walking from the Bandra Station to my shop..
From 10 am and its almost 8.30 pm..
My son Asif bought my lunch, chicken biryani..
Today I had a visit from Mr Dilesh Parekh he is the Guiness World Record holder for the largest number of cameras about 4500 .. He is a jeweller and was once a photo journalist..
He gave me an offer for my cameras but it was as though he was asking for it free.I declined.