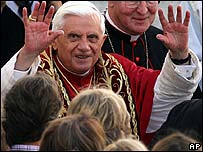 Pope Benedict XVI
Originally uploaded by flickr photographerno1
In his speech at Regensburg University, the German-born pontiff explored the historical and philosophical differences between Islam and Christianity and the relationship between violence and faith.
Stressing that they were not his own words, he quoted Emperor Manual II Paleologos of the Byzantine Empire, the Orthodox Christian empire which had its capital in what is now the Turkish city of Istanbul.
The emperors words were, he said: "Show me just what Muhammad brought that was new and there you will find things only evil and inhuman, such as his command to spread by the sword the faith he preached."
Benedict said "I quote" twice to stress the words were not his and added that violence was "incompatible with the nature of God and the nature of the soul".
news.bbc.co.uk/2/hi/europe/5346480.stm


Pope Benedict XVI
Need to put his own house in order
Roman Catholic priests
Cassocked bursting libido
repressed sexually starved
Lustered eyed Lust
an incurable genetic disorder
Sweet assed , succulent Irish kids
As their food and as fodder
Custom made delicacies
Also on male order
the Church pays out
Millions before a court orders
I don’t say this
But the world news recorders
Bosnia and killings
Popes spiritual legacy
Tarnished Temporal order
The Pope I thinks suffers from
Jehadi delusions Islam phobic
Mental disorders
Proselytizing Hate
Creating new borders
the Popes excuse for
His Anti Islamic remarks
I did not say it
Not becoming
Of a Man of his stature
a Head of a
Religious Order

His Holiness should heal.. with Words Deeds like Jesus Christ... need of the hour.. in a World gone Insane..and also think of Christians that live as minorities in fanatical atmosphere of fundamentalist Hate in some countries...
We as Indians believe in Live and Let Others Live.