My Morning Starts With Garbage 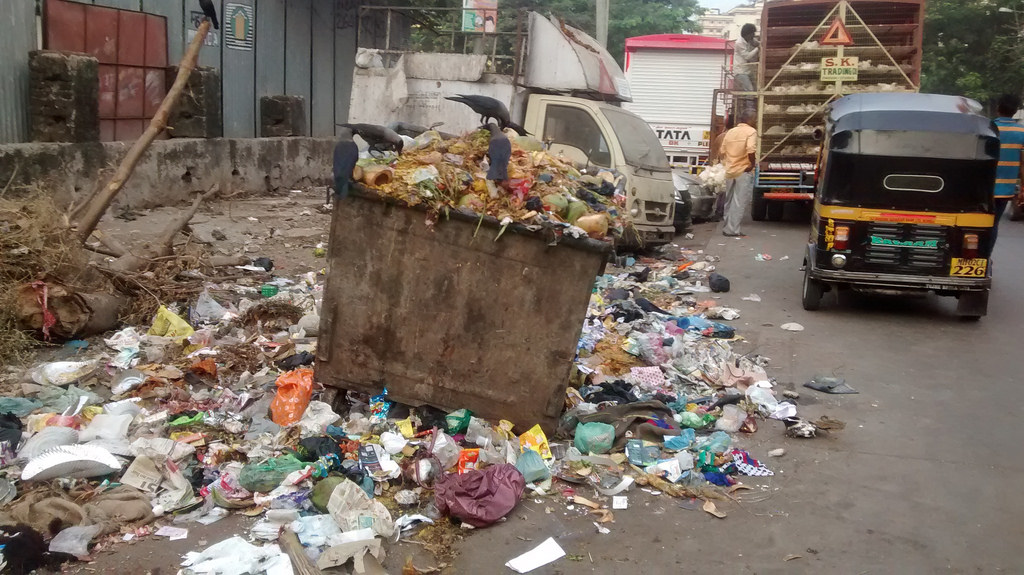 And this is Bandra Reclamation very close to Hotel Rang Sharda , I am going towards the MET Cricket grounds for my daily morning walk..what beats me is that the size of the garbage bin is far too small for the size of the slums in the vicinity ,,All the slum residents take a potshot to throw the garbage and most of the time the aim misfires .

And stringent fines even caning wilt not stop the people from littering it is in the DNA of the Mumbaikar to litter it runs in his bloodstream and he loves to throw garbage out of the window , sometimes he loves to deliberately throw the garbage in his neighbors porch and the Mumbaikar also loves to pee on the streets , shit and spit it is all part of his DNA.

So I have tried to be less myopic and now try to see garbage not as garbage but as Art .. the ultimate street Art and Mumbaikars are born Garbage Artists , crows cats dogs goats love this awesome street Art . they come plunder this art adding their own skills of re arrangement ,, like flower arrangement .
I dot know painting but this garbage art could hang on the walls of some of the best houses in Mumbai.. depends who paints it and this Art Made In India could be exported and help buy gloves shoes masks for the Municipal Conservancy staff as our Municipality goes bankrupt buying outdated hospital equipment and this money could be used at the much neglected Gen Arun Vaidya Municipal park presently a hideout for drunkards and drugaddicts and plainscloth cops searching the place for Bandra gold chain snatchers ..Lalmitti  at Bandra Reclamation they say has given birth to some famous infamous gold chain snatchers .

So in a way shooting Garbage and it is not a fetish like shooting stinking barefeet or sexy legs of women walking the streets .Garbage has given birth in me to use words poeticize the Lord of The Flies and I am close to my death bed 61 plus so I have trained my granddaughter Nerjis to shoot Garbage and enhance her artistic instincts ,,she has vision to see shoot and glamorize Garbage that we see spread evenly in Bandra ... and though we may be different in our religiosity as Hindus Muslims Christians we are unanimously united in Humanity with Garbage .I did not include the Parsis of Bandra their garbage is always in original state and the bhangarwalas buy the Parsi garbage as it includes old frames , gramaphones , old family pictures Dinshaw Uncles crickety but poetic rocking chair .. So Parsi garbage has value for Money

The most filthy stinking fulsome is the Muslim garbage , and this garbage is what you see in most Muslim slums and in areas where they live ..could we divide Garbage according  to Muslim Garbage Hindu Garbage Christian Garbage ,, all in all this part need a lot of study so I just shoot Garbage  and move on from one Garbage site to another in Bandra .. And I know all the major garbage sites in Bandra ,, I wanted to do a photo walk like Mr Thomas Hawk..but somehow I could not get the right sponsors as I wanted the kids who come to unlearn photography shooting Garbage have a great time at the few Irani joints in Bandra starting bun maska chai at Pahelvi Bazar Road and nice hearty vegetable keema brun , paya soup at GoodLuck Irani Restaurant near Mehboob Studio ..

And I want to give nice mementos here I would ask our local representatives Ms Poonam Mahajan and Advocate Ashish Shelar to give them scholarships so they can go shoot garbage in Singapore Bangkok Shangai and other Far Eastern countries and they could be  featured in You Magazine too.