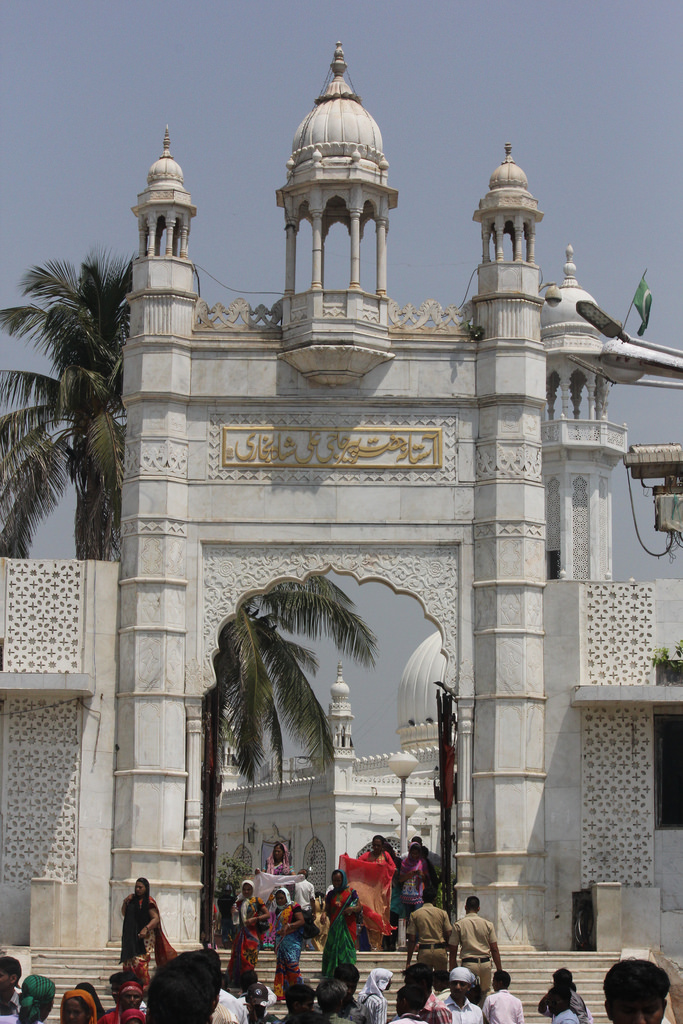 The Haji Ali Dargah is a mosque and dargah (tomb) located on an islet off the coast of Worli in the Southern part of Mumbai. Near the heart of the city proper, the dargah is one of the most recognisable landmarks of Mumbai.[1][2][3]

Background[edit]
The Haji Ali Dargah was constructed in 1431[4] in memory of a wealthy Muslim merchant, Sayyed Peer Haji Ali Shah Bukhari, who gave up all his worldly possessions before making a pilgrimage to Mecca. Hailing from Bukhara (present day Uzbekistan), Bukhari travelled around the world in the early to mid 15th century, and then settled in present day Mumbai.

According to legends[5] surrounding his life, once the Saint saw a poor woman crying on the road, holding an empty vessel. He asked her what the problem was, she sobbed that her husband would thrash her as she stumbled and accidentally spilled the oil she was carrying. He asked her to take him to the spot where she spilt the oil. There, he jabbed a finger into the soil and the oil gushed out. The overjoyed woman filled up the vessel and went home.

Later, Pir Haji Ali Shah Bukhari had a recurring and disturbing dream that he had injured Earth by his act. Full of remorse, he soon fell ill and directed his followers to cast the coffin carrying his body into the Arabian Sea. Haji Ali died during his journey to Mecca and miraculously the casket carrying his body, floated back to these shores, getting stuck in the string of rocky islets just off the shore of Worli. Thus, the Dargah was constructed there.

On Thursdays and Fridays, the shrine is visited by at least 40,000 pilgrims. Irrespective of faith and religion, people visit the dargah to get the blessings of the legendary saint. Sometimes, especially on Fridays, various Sufi musicians perform a form of devotional music called Qawwali at the dargah.

The entrance to the Dargah.
The Dargah is built on a tiny islet located 500 meters from the coast, in the middle of Worli Bay,[6] in the vicinity of Worli. The edifice is a brilliant specimen of the Indo-Islamic style of architecture. The islet is linked to the city precinct of Mahalakshmi by a narrow causeway, which is nearly a kilometre (0.62 mile) long.

The accessibility to the dargah is very much dependent on the tides. As, the causeway is not bound by railings, when the causeway gets submerged during high tide it becomes inaccessible[citation needed]. Therefore, the dargah is accessible only during low tide. This walk on the causeway, with the sea on both sides, is one of the highlights of a trip to the shrine.


The whitewashed structure occupies an area of a marble courtyard contains the central shrine. The tomb within the mosque is covered by a brocaded red and green chaddar (tomb cover sheet). It is supported by an exquisite silver frame, supported by marble pillars. The main hall has marble pillars embellished with artistic mirror work: blue, green, yellow chips of glass arranged in kaleidoscopic patterns interspersed with Arabic patterns which spell the ninety-nine names of Allah. As per the Muslim traditions separate praying rooms for ladies and gents are provided here to pay their respects. During the high tide, the dargah seems completely isolated with no access. It looks more like a little island.

Repair and Renovation[edit]
The six hundred year old[7] Dargah structure has corroded, due to constant erosion, saline winds and constant flow of 80,000 people per week.[8] The structural upgradation of the Dargah started in October 2008. The Dargah will be beautified with first and second quality white marble, which will be brought from Makrana, Rajasthan, the same place from where marble for the Taj Mahal was brought.

The repair and structural upgradation work is envisaged to take 24 months divided into two Phases.[9] Phase One will involve reconstruction of Mosque and Minarets, Phase Two will involve renovation of the Sanitarium Building. When the reconstruction work is complete, the holy shrine will give the feel of a Taj right in Mumbai’s brackish sea water.