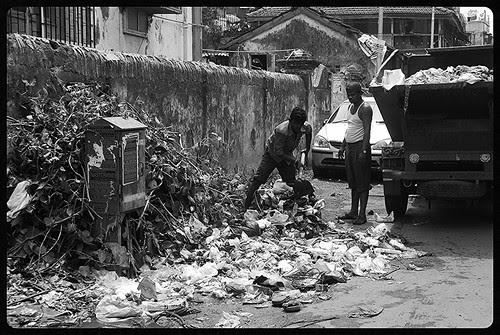 This garbage mound has two religious places in its vicinity , this is against the Shia Mehfil wall and bang opposite the Satghare Ram Mandir Bandra Bazar Road.

And I dont why the lifeless spineless residents of Bandra Bazar love to throw garbage in the open..something is wrong with the psyche of the Bandraites ..

The Municipality would hardly be bothered , their head in charge keeps blaming structural changes in the building at Mazgaon that collapsed like a pack of cards , without the matter being investigated by the police and she does not talk about her peoples responsibility.. the worst managed allegedly the worst I dont want to say it is the Municipality , with no heart or human feelings.. so imagine what feelings they have for rubbish open garbage mounds lying on the road of Bandra.

The Municipality should be privatized .. made a semi autonomous body to save the people of Mumbai from further building collapse , death on potholed roads ..and apathy neglect and inhumanity..they suspend people below the pyramid but the heads on the top are intact untouched ..