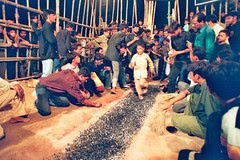 I start another series on the Shia Moharam segment , walking on hot coals , known as Ag Ka Matam.
I have walked on fire in most of the cities that I went to shoot Moharam, save Hyderabad and Kolkatta.
Lucknow is the pioneer in this form of mourning for the Imams family that braved and walked barefeet as captives from Karbala to Yazids court in Damascus.
This captive family was no ordinary family but the blood stream of the Holy Prophet..Peace Be Upon Him.
I was not allowed to shoot pictures of the Hussain Tekri Ag Ka Matam, because of reasons unknown to me , but because the rights were sold to some exclusive channel. I was told by some people it is alleged.
A few Shia think in terms of big bucks..
Lucknow Ag Ka Matam at Diyanutdaulah and Kazmain are the best
The much touted Bada Imambada Fire Matam is a total eye wash, amateurs that have given it a complete bad name..I sincerely hope that Maulana Kalbe Jawad Saab takes more active interest in this event placing it in capable hands...
The Mumbai Fire Matam is mostly done by the Khoja Shias at Bandra Supare Talao.At the Khoja Shia cemetery Arambagh at Mazgaon.
Also at Mira Road.