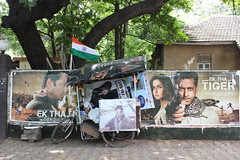 Ek Tha Tiger is a 2012 Bollywood romantic action thriller film starring Salman Khan and Katrina Kaif in the lead roles. Produced by Aditya Chopra and directed by Kabir Khan, the film marks the third collaboration of Kabir Khan with Yash Raj Films after Kabul Express (2006) and New York (2009). It is also Salman's first film with the company. The music for the film has been composed by Sohail Sen, along with a guest composition by duo Sajid-Wajid.[3]
The pre-production for Ek Tha Tiger started in the second half of 2010, after the script had been completed. The principal photography commenced on September 2011 and ended in June 2012. The film had been shot in as many as five countries across three continents.[4]
Initially scheduled for a release on June 2012, the film faced delays and opened up on August 15, 2012, coinciding with the Independence day of India. Ek Tha Tiger has crossed 100 crore (US$18.1 million) net in India, which is Salman Khan's fourth film in 100 crore club.[5] Ek Tha Tiger has since emerged as one of the highest grossing films of all time in Bollywood.

A mysterious bachelor (Salman Khan) lived in a government employee neighbourhood about whom his neighbours know nothing. It is because he is India's top spy, an officer with research and analysis wing (RAW), India's external intelligence agency and called Tiger in his codename. Tiger reports to Shenoy (Girish Karnad) in New Delhi after every field mission for the last 12 years. Then Tiger is sent on a mission to Dublin, Ireland to observe a scientist of Indian origin, Professor Kidwai (Roshan Seth), who teaches at the Trinity College and suspect of sharing his finding with Pakistan defence establishment. Fellow RAW agent, Gopi (Ranvir Shorey) accompanies Tiger on this mission. Tiger attempts to meet the scientist but is not successful although he meet with scientist's caretaker Zoya (Katrina Kaif) who is studying at a fictional dance academy. He tries to befriend Zoya and as he begins to get closer to Zoya. He begins to discover his human side. For the first time in his life, Tiger falls in love. Then begins a journey that Tiger and Zoya embark upon battling the dark world of intelligence and espionage that forbids them from falling in love.
Cast

Development
In May 2011, reports claimed that Salman Khan and Katrina Kaif would come together for a film titled Ek Tha Tiger.[6] The script for the film had been completed in November 2010,[7] and underwent changes in February 2012.[8] It was Khan's first venture with Yash Raj Films and marked his fourth film opposite Katrina after Yuvvraj.[6] Before starting the film, he postponed a project titled Sher Khan by his brother Sohail Khan, as he had to allot his dates.[9] His fee for the venture was 32 crore (US$5.79 million).[10] The film was also one of Katrina's first in the action genre.[11] Ranvir Shorey was signed in for a supporting role.[12] Kabir Khan was announced to be the director.[6] On May 3, a photo shoot was held with the lead actors.[7] Later, Punjabi actor Gavie Chahal signed in for a character named Abrar in Ek Tha Tiger, which happens to be his Bollywood debut.[13]
Filming
Initial reports claimed that principal photography would start by June 2011.[6] The first schedule began on September 2011 in Dublin, Ireland. It had previously been postponed for a short time, when Salman set off to USA for a surgery regarding his condition of Trigeminal neuralgia.[14] Filming took place at the Trinity college,[15] and the Ha'penny Bridge. A set of action sequences were also shot in the city.[16] During filming in Dublin, the Irish crew of the film held a demonstration and halted the shooting temporarily, reportedly due to filming conditions and payment.[17] The filming of the second schedule took place in Istanbul for two months.[18] In February 2012, the film’s cast and crew went to Havana, Cuba, to shoot for one month.[19] There, Salman shot a cameo scene for a local tourism company. The sets used in the film were featured in the ad.[20] Following the period, script issues resulted in the postponement of the film’s planned shoot in Hong Kong.[21] Afterwards, a three day schedule was completed in Delhi.[22] The filming ended in June 2012 after the last schedule was shot in Bangkok.[23] Salman had to undergo a fitness programme titled 'Dirty Running' for his action sequences over 30 days.[24] Katrina Kaif played her role without makeup.[25]
Soundtrack

Initially, Pritam was signed as the composer of Ek Tha Tiger. The first digital poster of the film credited him as such.[26] However, he opted out of the film later due to date clashes with yet an other Yash Raj projects, Dhoom 3. Chopra, who had worked with Sohail Sen's in their film Mere Brother Ki Dulhan, roped him in to compose for the film.[27] The lyrics were penned by Neelesh Misra.[28] A song titled Jaaniyan which had vocals by Asif Nawaz, a Pakistani artist was reported to have been leaked from the film's soundtrack. However, YRF officials denied the news, saying that the album was not in any danger of being leaked.[29] A single track named "Mashallah" crooned by Wajid Ali and Shreya Ghoshal was released on 12th July 2012.[30]
Tracklist