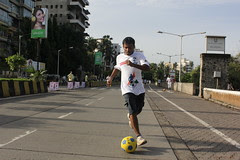 What more do you want to know about Marziya Shakirs skill with the camera ,her calm composure while the footballer is approaching her..she did not move away but he paid respect to her and moved out of her way after she had taken the shot unlike our so called hot shot photojournalists Marziya Shakir shoots single frames no Khat Khat .. no Phat Phat..