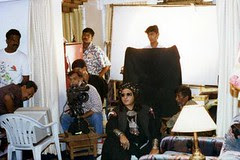 My Acting Stint Ranjish Serial, a photo by firoze shakir photographerno1 on Flickr.

Rahul Anand younger brother of Mukul Anand was producing a serial Ranjish directed by Mukul s chief assistant Shahjahan, and I was given a role , and had to wear the clothes that I wore normally.. It was an unforgettable experience..but arc lights were not meant for me ..I was a failure as an actor , I think.. now in retrospection..