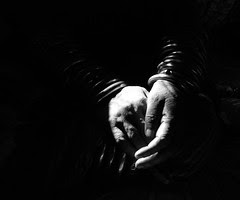 Enslaved Spirituality, a photo by firoze shakir photographerno1 on Flickr.

These are hands weighing 30 kg, the bracelets are all welded carbonised steel, they cannot be removed , and on his feet another 35 kg, also welded, the only buffer on his feet is a cloth bandadge so as not to peel the skin of his feet .

He has aged , his penance in memory of the fourth Shia Imam Zainul Abedin Sayyede Sajjad the surviving son of Hazrat Imam Hussain.Did he really survive Karbala - yes he did.
It was Sham - Damscus where the womanhood of Islam was betrayed, that prematurely killed the fourth Imam from within and without.

He aged his hair turned white overnight , he could do nothing weak , bedridden and await deliverance from the evil deeds of Yazid his captor.
And being the Imam of his time see his sister 3 year old Sakina cry and ultimately die languishing in a cell. Even Zainab the indomitable Sister of Hussain took her strength from her nephew and her Imam.. Sayyade Sajjad.
His penance and his devotion to Allah was what kept him alive.


Now please do not ask me why this Sunni born asectic whom I call Zanjirwale Bawa has taken this penance of walking life with chains, following a Shia Imam?

I was meeting him after Haji Malang pictures I have not posted as yet.
He has stopped wearing his chest armour that weighs another 45 kg, he says it tires him out, he is human and humble enough to tell me this.


We know each other for more than 5 years he was being humiliated at Chancawalli Shrine by one of the important hoodlum type person there , and its a story that saddens me the corosion in mans soul.
The man offered Rs 35 to Zanjirwale Bawa placing the money on his face and told me to take his picture I refused.
Rs 35 is an insult to both the ascetic and the memory of the Fourth Imam.
He had me thrown out of Chancawalli Dargah, this gangster man.
But while leaving the Dargah, I turned back and saw the Bawa limping behind me seeking forgiveness , I put my hand in my pocket and you wont believe it the exact amount of Rs 35 came out of my pocket .
I handed it over to the Bawa.

This is our bond and we meet at crossroads of life.

While I was going to Pune last Sunday I got a call from the Bawa that he was at Abdul Rehman Dargah at Dongri for 3 days.But I could not meet him.

On my return from Pune I completely forgot about him ,and was going to Khar with my wife , I got a call on my phone and he was trying some other persons number but he connected to me.

This time he was staying for a few hours at Shastri Nagar Santa Cruz , the following morning he was leaving for Haji Pir Dargah in Kutch.
He wished if I could see him.

I left my wife to do her work for which she had come and I set out to meet Zanjirwale Bawa towards Santa Cruz which was on my route.
He was on the 6 th floor the lift had broken down so I walked up the steps , and its here that I shot his hands.