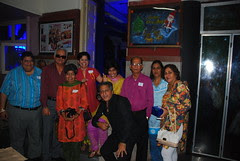 This Brings To End Holy Namer Reunion 20112, a photo by firoze shakir photographerno1 on Flickr.

This picture brings to an end my tryst with the past , behind those who stood behind me unseen to them but visible to me was Fr Fx Fernandes Ghost , my alter ego caught in limbo of timelessness and space..

There is an incident I wanted to narrate that took place in the school hall, it was a play that I was one of the contenders actors along with others it was a play called Nefa Ki Ek Shaam, I was playing a Kashmiri freedom fighter and I the judges were beneath the dais , I was supposed to be shot , and the curtain would come down I was ambitious and an establised actor drama founder of my alma mater with Sister Claire ..
I won prizes but this was to be my last performance so the moment I got shot I let our a deathly shriek, and as the curtain came down I held to it and fell of the stairs of the Holy Name stage.

I got the Best Actor award .. so this school hall had many memories of roles I had enacted , and the huge number of prizes I won during Prize Distribution I was a notorious mischievous kid, a rebel but fought for justice equality and I was very good in my studies .. all my life in school I came first along with third or second place going to Ramesh Mulchandani or Dennis Fernandes in South America..

Yes school was real fun..and for my writings that I made into poetry blogs , photo blogs I took inspiration from Gilroy Dsa his sisters are with me in this picture ..

Yes I am an accidental photographer ...I shoot the drama poetry of life .. it touched me now it touches you too..