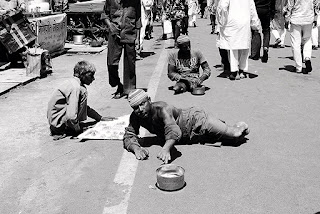 I shot this image in Ajmer during the recent Urus April 2016.

I have never been to Ajmer during Ramzan Moharam or Bakra Eid ,,only the yearly Urus ...

If I really felt God it was in the sockets or socketless eyes of the Beggars of Ajmer ,, and I shoot beggars because I hate shooting flowers insects and other mundane stuff ,, I shoot the Fall of Man I shoot the perversity of the beggar,, in the eyes of the man who is not a beggar .

When I am in Ajmer during the Urus  for 4 or 5 days and I shoot the Dargah lanes the Malangs the Rafaees the Hijras and the humility of the Chishtiya order as it touches binds everyone ,,for the Hijra Khwajah Garib Nawaz is the Ultimate Provider ,, he gives even when they dont ask..

I have cried while shooting pictures my feet burning on the marble floor of the Dargah ,, a mother was asking the Holy Saint to spare her dying sons life and I was shooting every tear that dropped from her eye ,,

I shot a spiritual crossdresser known as Moosa Suhagins dancing on the same hot marble floor and he has trinkets on his feet and he danced till he fainted and fell at my feet ,,why my feet ,,because he knew I felt his inner pain he knew I knew the poetry of his life ..

Beggars in Ramzan ..this is actually their Holy Month ,, and they come out from every crevice ,, and they fast too and I did break fast with a beggar group at Dongri,, ,,I could not shoot the pictures it would have killed me,,

My grandchildren hone their photographic skills during Ramzan shooting food lanes and beggars ,,,


Ramzan and the Eid Namaz I shoot it every year ...and in a few days I will leave Mumbai to shoot the Khamakhya Fair in Assam ..my French photographer frend is trying to come too .. I always wanted to shoot this fair but could never do it short of funds my stay and the long journey,, even now I dont know how I will manage but I am going ,,to document this Yoni Temple ,,

I spoke to Kapoor Khamkhya in Hardwar he is a powerful tantric also my Tantric Guru  so he might help but he is not sure  if he will make it ,, most of the Naga Sadhus of Juna Akhara dont miss this event ,, it will be my first visit .