Two Friends ,,, Vinay Parelkar And Me Searching For Hope Beyond The Camera 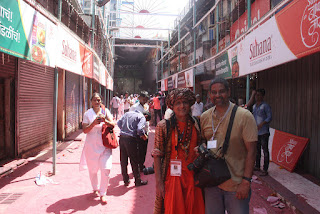 When I began learning photography under Mr Shreekanth Malushte almost 20 years back Vinay was already an established well known pictorial fine art photographer unlike his pedantic pompous contemporaries he was a thinking artistically endowed photographer.
We met once at National park an outdoor portraiture workshop of Mr Shreekanth Malushte in BW .. during the film negative era ..he helped me put the cut roll in my Nikon SLR and we got along .. perhaps because as a photographer I might have been raw and new but I was not new to life I had seen more pitfalls more life than Vinay..
We belong to the same camera club PSI Mumbai we went to an outing together with Mr Shreekanth Malushte to Konkan and we became good friends ,, at the outing I only shot BW..with lots of filters and used the tripod,, this was landscape photography.
Than from analogue photography I evolved as a blogger once I entered the digital age on the Internet in 2004 ..and camera clubs in their self built walls of conceit and insularity till date dare not talk abut blogging .. blogging those days at camera club level was an alien madness giving pictures free on the net .. a big blow to Marwari oriented minds that simply thought photography was to make big bucks selling your slides .all this in the late 90 s
Making money is important as buying cameras and accessories and keeping up with the latest technology lay great pressure on the pockets of most photographers , if you have a sugar daddy and if you are rich hardly matters .. but for the photographer starting out it can be pretty tough.
I bought a camera on a bank loan and my guru Mr KG Masheshwari publicly humiliated me at our club.. he was right he said invest in business but not on hobby and Mr Maheshwari scion of the Birla family used the same camera same tripod for over 30 years I think he used the Mamiya 330.. and it was his decision , he could buy the most expensive camera if he wanted ,,he did later but than his eyesight was failing , he too jumped the digital bandwagon and was the healthiest internet user for several years .. yes I really miss him and he was fond of Vinay a lot he was very fond of Mr KB Jothady .. and I miss his morning calls and camera gossip..
Vinay and I shoot differently .. he is more sure confident and well composed within his shots ..I shoot impulsively I shoot without thought without method and I fuck F stops ,,I dont know why I shoot what I shoot ,,but an old picture if I bring it forward from my Flickr archive I can tweak it poeticize it and it becomes new in thought in body within its imaginative dimensions .. for me photography is poetry .. be it words or silently mute devoid of words.
I would die in my soul as a salon or camera cub photographer and I am sure some folks may not like my words but honestly introspect the shit you shoot your sick rural pastoral pictures that are devoid soul or poetry I would rather shoot beggars..and those mindless bullshitters that add a comment lovely pictures sir ,, there is no truthfulness in their likes .. they dont have the balls to give honest opinion , basically lick ass.. because the person concerned is a camera club master and achiever ..see the brochures the camera club newsletters I would puke no innovation horrid borders and the same picture of a mother sitting at a door suckling her child ..wake up for gods sake get real .. dont insult humiliate downgrade the third eye of Shiva within your camera consciousness and the reason for this apathy , this degradation is the politicization of camera clubs and photography..
Where is Mr Bhardwaj Where is Mr Unwala Where is Mr Sam Tata Where is Mr Mitter Bedi where is Mr KG Maheshwari , where is Mr AS Syed where is Mr BW Jatkar all writhing squirming in their grave ..seeing the death of photography at camera club level.
And I reiterate call me biased opinionated but I stand by my words .
And to keep alive the memory of the stalwarts past and present on the souls of my grandchildren I demystified the camera ...let them break all barriers and let them shoot from the age of 2 .. let them breathe the fresh air of change .. made them shoot beggars hijras and everything possible on the streets ,and most of all made them unlearn photography..
And now I see my world through their eyes .. now as a 63 year old man I refuse to kowtow to old traditions the color wheel or one third rules I make and break my own rules ,,
And this soliloquy in the morning is known as blogging .. it gives birth to pictures too , pictures not as pictures but as real life stories ..this is with malice to non..
Two people in a picture both held by the soul of a camera and an asymmetrical assimilated analogy.. beggar poet and Vinay my friend ,,
Happy Morning From Bandra.
By Firoze Shakir Photographer No1 - October 01, 2015