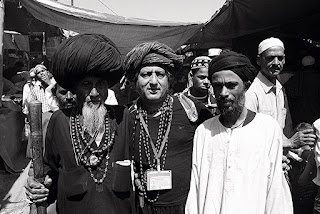 I have documented Sufism at many places in India ,,Delhi Ajmer Sharif Unjha Bara Banki but one place that stands out as a pictorial storyboard is Makanpur ,, the 896 Urus of Zinda Shah Madar ,,head of the Sufi Order of Madarriya .

On my own I could have never gone to shoot it ,,but because I had been initiated as a Malang in 2011 and was invited by the Head of The Aqasan Malangs Syed Masoomi Ali Baba and  Syed Rafiq Ali Baba I went and shot the rituals the Malng community , and their culture .

It was perhaps my best spiritual outing and though I tried to go back it just did not happen and I am connected by phone to Syed Rafiq Baba.. so next year come what may I have decided to go there with  a friend ..a photographer too.

The Dhamal body piercing rituals are out of this world at Makanpur ,, as the Qalandaris to take active part in it along with the Rifais ,,
By Firoze Shakir Photographer No1 - October 04, 2015