The Long Lost Malang From Bandra and Original Content 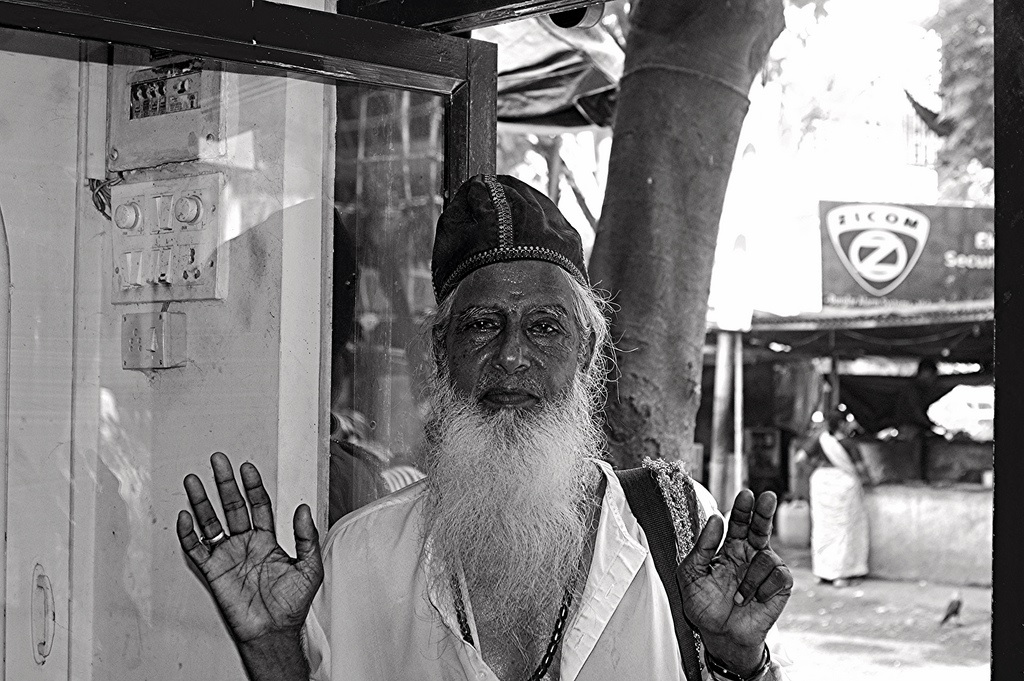 He was an iconic person , who begged peacefully in Bandra , and was equally humble and endearing to all communities , knew the Shlokas that he recited in Hindu shops , offered prayers for the well being of Humanity .

I met him many a times after I shot him in 2005 but since last three years I have not seen him at all, he was not keeping well but you could not miss his tall figure at the Bandra Station Idd namaz.

And I chronicled such interesting looking people more as a photographer for their majestic photogenic quality ,, and as I shot them they became part of storyboard of my Mumbai Humane Comedy ,,some aged  some still stayed fresh and some simply disappeared .

And there are many who just disappeared in thin air ,,,never to be seen again and I am left holding their captive souls in a cybernetic cage .

Beggars , Malangs Rafaees Sadhus Hijras I shot them all, the Whippers of Ma Ambe , street performers , street vendors and all this came under street photography, I hardly shoot now , call it laziness or even photographic apathy.

The passion drive have all gone and gets resurrected during  certain religious feast's .. I can easily say I dont shoot as much as I shot when I started out .. Even those events I shot every year prolifically I stopped ..and as I am not part of a group , and shoot myself it hardly matters .. I am an impulsive moody photographer ..I dont shoot Moharam in Mumbai so almost the bulk of my Mumbai documentation decreased considerably ,, I dont shoot the Rafaees here in Mumbai ,,

And though I know there is a lot once could shoot in Mumbai in my case it is repetitious ,, and I dont go out of Mumbai .unless I shoot Ashura Chehlum or Ajmer Sharif.

I want to go to Makanpur Urus of Zinda Shah Madar this year but I dont know whether it is possible once because of the distance and second my affinity to Bronchial allergy mostly in winter .

So now I am sorting and going over my old CDS DVDS , and trying to segregate some of my stuff most of the stuff got corrupted with age ,,but some I am reblogging adding new thought new content ,,I could never blog with a borrowed picture , and because I dont have knowledge of some religion I use Wikipedia .

I would just like  to leave my images without text , but text is a remedy for those not part of my ethos or my world.

And than comes the main part I type with one finger ,, all my blogs with text are courtesy of that one magical finger that makes pain and poetry visible .

Now with your mobile phone you can capture document record so I am surprised to see the so called bloggers the old new wannabes copy pasting duplicating the wildweb .. and it literally makes me puke the few blogs I see at Indibloggers blogging   without using their original head that sadly there is no one to guide mentor them no even the developer of the creative platform.

You want to be seen heard create your own niche your own voice  why plagiarize ,copy another mans post as your own I d rather stop blogging when I reach that stage ..and having even 5000 blogs to your credit with another mans text and some borrowed stolen pictures Fuck is not blogging at all.. all this technical bullshit about SEO blogging and the person cant shoot his own picture , post his own thought is the saddest part of blogging in India

Its also about your background parentage and your immediate surroundings ..

And so I gave my grandkids a head start on the camera ..and demystified the camera for them..but I made them opinionated too .. they wont ever use a Nikon even if you gave it to them free ,,We are all three incorrigible Canon Users ..

Though I got my First Canon 7D in 2011 and I got the Canon 60 D for my granddaughter Marziya Shakir in the same year ..she was 4 year old. I have never been enamored by Nikon after having shot the bulk of my images with Nikon D70