No Hands No Legs Appu My Friend 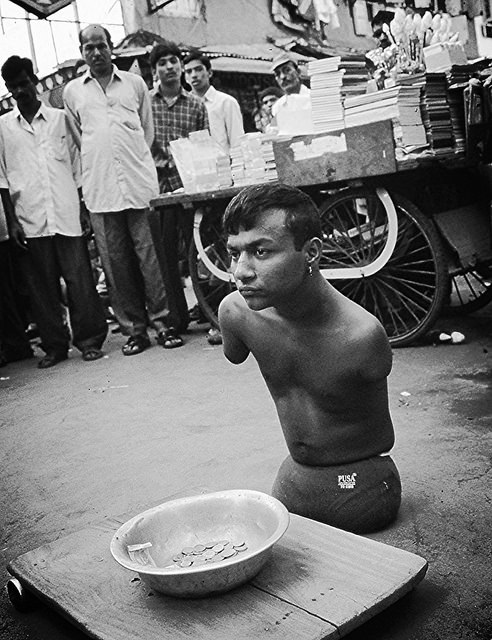 I first met Appu at Chor Bazar he begged a few blocks away near the sweet shop close to Bohri Mohalla . and he sat here on Fridays before Namaz time , with a few Masjids o this road ..I came here those days to the street side Friday Chor Bazar flea market .

Initially when I shot his pictures , his guardians were upset thinking that I would sell his pictures to the foreign press make a lot of money giving them nothing but loose change.

I was hurt and was moving away when Appu called me apologized for his guardians behavior , and I was barefeet looked every inch a Malang.

We became good friends and I met him every Friday , but than he disappeared , and I stopped going to Chor Bazar completely .

I also shot him on Shabbarat night at Rehmatabad Shia cemetery..drenched in the rains ,,,begging with his sister .

i never saw him after this for a very long time ,,,

Than I met him accidentally sitting on the lane at Mahim that leads to St Michael Church , on Novena Wednesday,I gave him Rs 100 and he deserves it ..My friend Glenn Losack loved him the moment he saw him , and I took Marziya Shakir my grand daughter to meet him Marziya was perhaps two year old..shot their pictures .

So Appu has been part of my pictorial genesis , and I refuse to call Appu a beggar .

Appu also used to sit outside Minara Masjid I shot him there too.

I have not met Appu this year he hails from Assam , he wears a Muslim cap and the hard staunch Muslims who like a Muslim to look like a Muslim made him sport a beard too.

And now I have two grand daughters Marziya and Nerjis both want to shoot him .. but I have to find him first ..